They want the government to cushion their businesses by controlling prices

The rising cost of chicken feed and other farm input could soon kick out small-scale poultry farmers in Taita Taveta out of business.

Most of the farmers depend on hotels for their market, but their businesses have been affected by Covid-19. They are now dependant on slow-paying brokers and friends.

The farmers, who mostly keep up to 500 birds, have raised concerns about the fast-rising cost of farm input. They want the government to cushion their businesses by controlling the prices and linking them to the steady poultry market.

Prices in the industry are largely determined by feed prices and input to poultry farming.

“It is becoming hard to do business since it has turned out to be a loss-making affair. The cost of production surpasses the selling price at the market,” says Luciana Pole, a poultry farmer on Voi’s Mwakingali estate.

A fully grown broiler chicken fetches a staggering Sh400 in the local market while an improved kienyeji goes for Sh1000.

“Besides the costly water and power bills, a sizeable number of chickens are dying from Newcastle and other diseases. We can hardly afford sufficient medicine,” she told the Star in an interview on Tuesday.

Pole started the poultry business in 2015 as a source of income to take care of her disabled daughter. She could supply more than 50 chickens to nearby hotels along the busy Mombasa-Nairobi Highway every week.

“Business was booming and we had good returns,” she says.

She further points out that she doubled her poultry business from 200 chickens to 400 to meet the high demand and hired two farm assistants.

In the wake of the pandemic, her blossoming business hit a hard surface as the hotels were closed to contain a possible spread of the virus.

Consequently, the demand for chicken went down and she was forced to lay off her farm assistants.

“Even when hotels were later opened, the demand did not grow. We only sell chicken to brokers who transport to far markets,” she said.

The situation is similar at Dickson Masila’s farm in Sophia estate, a few kilometres from Voi town. Masila has three freezers full of already slaughtered broiler chicken. He is looking for a buyer to dispose of them. 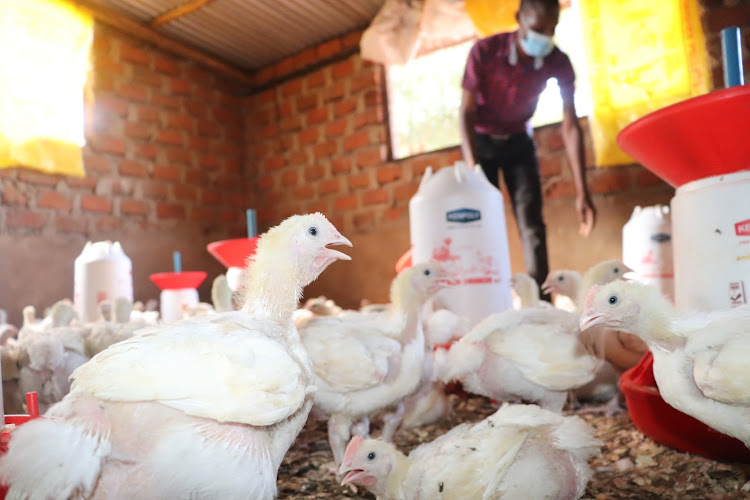 PRODUCTION: Dickson Masila attends to some of his chickens on his farm on Sophia estate.
Image: SOLOMON MUINGI

For lack of a readily available market, he had to slaughter all the mature birds to cut the cost of feeding them. At the farm, he has close to 700 broilers and improved kienyeji chickens at different stages.

“We are unwillingly being pushed out of this business by circumstances. The hiked prices are not favouring small-scale farmers and should be addressed urgently,” Masila said.

Masila says he was inspired to become a poultry farmer by other villagers who also had poultry farms that promised large returns on small investments.

“Passion has kept me moving all along. We are optimistic that the cost of production will one day go down,” he added.

Masila says poultry farmers in the region lack harmonised prices, thus paving way for brokers to exploit them by manipulating the prices.