• The operators, including matatus, tuktuks and boda bodas, say the Mombasa roads are too narrow and cannot allow a BRT.

• They say it will involve demolition of houses and business premises next to roads. 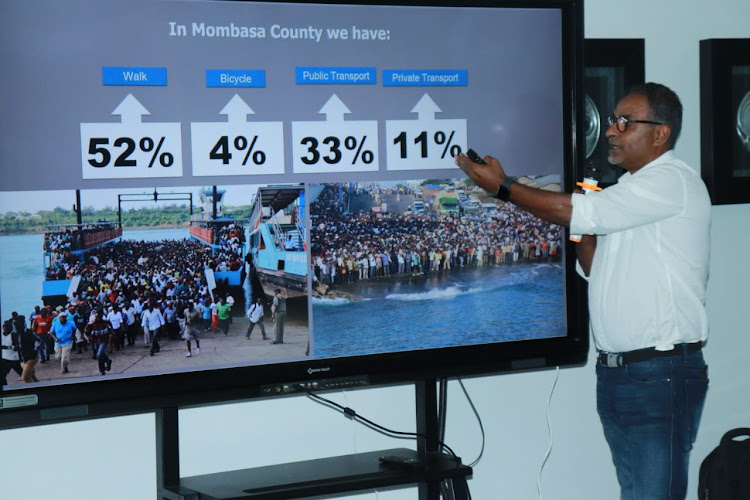 Public service vehicle operators have opposed the idea of a bus rapid transit system in Mombasa, saying it is a ploy to drive them out of business.

The county has plans to introduce the BRT at a cost of Sh1 billion.

But operators including matatus, tuk tuks and boda bodas say the roads in Mombasa are too narrow and cannot accommodate BRT.

They say if implemented, this would mean demolition of houses and business premises next to roads.

Transport executive Taufiq Balala said BRT will be a long-term solution to the traffic menace in the devolved unit.

A BRT system is a high-quality bus-based transit system that delivers fast, comfortable, and cost-effective services in metro-level capacities.

Because BRT contains features similar to a light rail or metro system, it is much more reliable, convenient and faster than regular bus services.

It contains dedicated bus lanes which operate separately from all other traffic modes.

Speaking during a workshop on non-motorised transport for Kisumu, Mombasa and Nairobi counties at English Point Marina on Wednesday, Balala said 97 per cent of the Mombasa population walk at one time or another.

“Traffic jams are caused by only three per cent of residents who own cars in Mombasa,” Balala said.

Mbarak said the plan does not make sense at the moment, arguing that Mombasa is a small island county with narrow roads whose expansion will involve demolition of houses and business premises.

“If they are serious about it, they will have to first expand the roads. But this has already been a problem before because the island, which is the most affected by traffic jams, does not allow road expansion,” he said.

Mwatsahu said there is an agreement between them and the county to have them consulted on anything to be introduced that affects them.

“It will not work if they do not involve us. You cannot compare us with European cities,” he said.

Mwatsahu said, “Crossing the road requires one to look both ways before crossing. Mombasa county is not doing that. They will be knocked down.”

Balala said the county has been trying to find ways to reduce traffic jams, including introducing a 'happy hour' where cars from the CBD to Nyali use all lanes for a cumulative 30 minutes in one direction.

“This has cut down travel time from the city centre to Nyali from one hour to approximately 15 minutes,” he said.

According to the county government, 52 per cent of the county’s 1.34 million population walk, 33 per cent use public transportation while four per cent use bicycles.

While only three per cent own cars, according to Balala, some 11 per cent use private transportation on the assumption that a personal car carries an average of four people.

He differed with the PSV operators who say expanding the roads is a solution.

“Expanding the roads and building new bridges do not help. BRT is a cheaper way, it will cost about five per cent of what a rail transport would cost,” Balala said.

In the last fiscal year, Kenya used Sh180 billion in road infrastructure. The amount was reduced to about Sh170 billion this year.

“If we only get Sh1 billion, we would be ready with a BRT. If Nairobi gets another Sh2 billion for a BRT because it is bigger, we are good to go,” Balala said.

This will solve the traffic menace in the two cities, and Kenya will save the other billions for infrastructure and divert it to healthcare or any other more deserving sector.

Balala said money is being wasted on roads, yet 'cities have existed without roads before’.

He called on national and county governments to prioritise BRT systems.

Most European countries, he noted, are investing in the BRT system despite having more developed underground train systems that are more efficient than many other countries around the world.

“Then we bring in the players in the matatu and tuk tuk industry so they can manage the system in partnership with us,” Balala said.

This will be to ensure no loss of revenue for the players.

However, the PSV operators said this is just one of the 'many songs the county sings' when it wants to impose their will on them.

“The bigger plan is to kick us out of business. How can we, private people, be involved in the management of the BRT, a public utility system?” Mbarak posed.

“This is what former Mombasa Mayor Taib Ali Taib said when he introduced Metro Buses in Mombasa. He gave us a lot of fake promises. The buses did not last six months,” he added.

Muruli said the county has to involve them in the plans so they can also hear their side of the equation.

“If it has to work, we have to be involved so we can know what our place will be,” he said.

The county plans to do the BRT system in phases. The first one will be implemented from the city centre to Mtwapa, which, according to the county traffic count, is the busiest and most populated route.

Already, the Kenya National Highways Authority has plans to expand the highway from Kengeleni to Mtwapa to a six-lane road via financing from the African Development Bank.

The Star has learnt that the county, when approached by the AfD and Kenha to introduce the plan, refused to sign an agreement, insisting that the two lanes be dedicated only to public transport.

“They have refused to do that. I also refused to sign the documents,”  Balala said.

This is why the project, which was supposed to start last year, is yet to take off.

“I believe that once we solve the issue of public transport, then there will be no traffic jams,” he said.

Balala said the Thika Superhighway in Nairobi was meant to solve the traffic jam menace once and for all but today, gradually, the snarl-ups are coming back because the road opened up areas along the Thika Road and people moved there.

“When you have wider roads, you attract more cars. Everybody went and bought and rented houses in Thika because they were cheaper there.

“Even in Mombasa, once we have a six-lane road to Mtwapa, everybody will go live in Mtwapa and there will be more cars there. The only way is a BRT system,” Balala said.

He said the ultimate goal is to have an efficient and safe transport system that will better serve Mombasa residents.

The executive said the Buxton footbridge, which was commissioned by President Uhuru Kenyatta, was poorly designed and is a threat to the safety of pedestrians.

“It takes you ages to go up. And then it’s so close to the footpath that pedestrians have to encroach on the road to get to the starting point of the footbridge itself,” Balala said.

He said the footbridge has to be brought down.

“But then it is a national government project and I don’t have the powers to bring it down. But if you want my advice, that thing should go down,”  Balala said.

Mombasa county is now doing tabletop crossings on some of its major roads.

They are mostly meant for persons with disabilities because they join two pavements on opposite sides of the road.

They have special markings that communicate to the visually impaired through touch.

“The dimples mean stop, you are about to get into the road. The lines show where the road is heading,” Balala said.

He said the next stage is to implement an Intelligent Traffic System, in collaboration with the Japanese government, where there will be traffic lights sensitive to visually impaired people.

“When it turns green, there will be a beeping sound to help them know it is time to cross. We hope to make Mombasa like any other developed city in the world very soon,” Balala said.

The county government plans to do away with all the roundabouts in Mombasa and copy the Japanese traffic system.

“Right now we are doing a traffic survey on all the 33 roundabouts and junctions across the county. The information that will come to us will inform us on where to remove the roundabouts and make crossings based on the traffic signals,” Balala said. 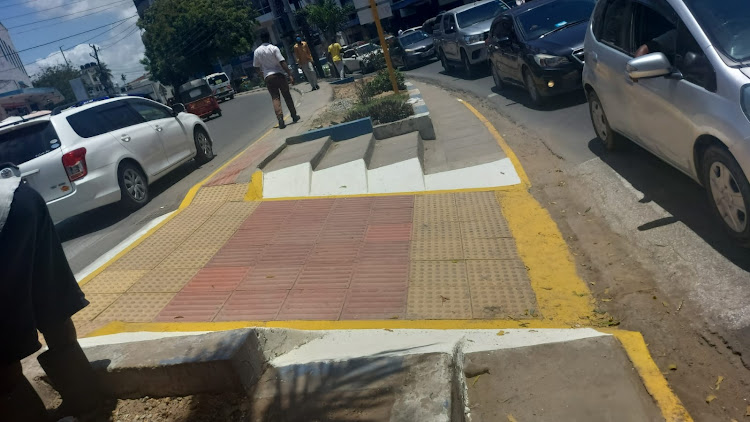