Joho warns against divisive politics ahead of 2022 elections

•The governor said there is life after elections. 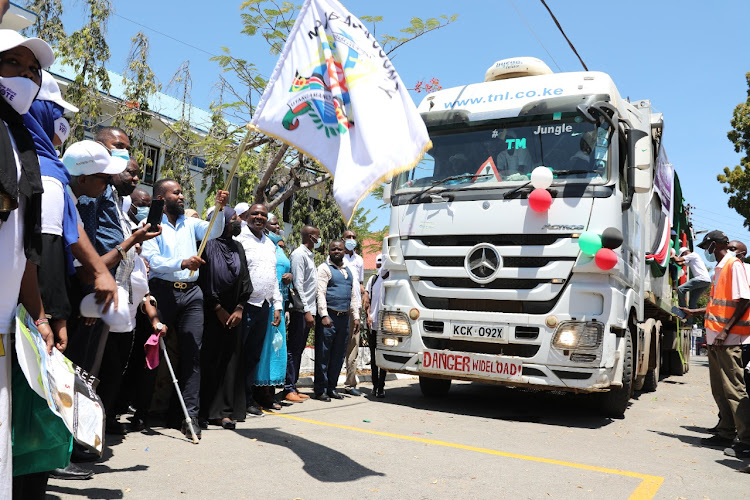 Mombasa Governor Hassan Joho has warned politicians against divisive politics, calling for peace and tolerance as the country gears up for the 2022 general elections.

Joho spoke on Tuesday afternoon at the county headquarters.

He launched the 001 Voter Registration Campaign to encourage young people to register.

Joho called for a conducive environment where all political candidates can freely engage the people to sell their ideologies.

The governor warned that the country is witnessing situations where the grassroots people are not listening to politicians they are opposed to.

Joho said such kind of intolerance is not good.

“We should create some space in our democracy where we can differ on ideologies, but still have mutual respect for one another,”  Joho said.

“That can only be achieved when we all agree to work together for the common good of having a united country.”

Joho said elections are very emotive and politicians are capable of plundering the country into chaos if they are not careful.

He urged Kenyans to avoid looking at their political opponents as enemies.

He said instead it would be better for people to come together for the sake of moving the nation forward.

“Countries have gone down because people were carried by emotions. When the time came for people to sit down and reason it was late,” Joho said.

“Some solutions will not be found when your emotions are high, you need to think through, understand and decide.”

He said there is life after elections.

Joho further called on the need to have issue-based politics that was focused on transforming the economy by elevating the living standards of the people.

“My brawl with the President was based on issues, but there was no hate or bad blood between us, we sat and ironed out what was wrong,” Joho said.

The governor launched a campaign caravan expected to traverse the six subcounties of Mombasa to call on those who are yet to register as voters to do so.

The Independent Electoral and Boundaries Commission on Monday launched a nationwide mass voter registration exercise targeting to register 5 million new voters ahead of the 2022 general elections.

She spoke to the Star on Monday.

The long-month exercise will run from October 4 to November 4.

Joho called on the coastal people to come out in large numbers and register as voters.

“The only way any person can participate in fixing the destiny of the country is by ensuring your voice is heard, the outcome at this point is not important, if you are eligible to vote, then you should do what is necessary,”  Joho said.

Makarani urged Mombasa residents yet to register as voters to take advantage of the period and get into the register.