The businessman-cum-politician on Sunday said unlike him, Raila has become a divisive figure

• Wanjigi says this is why ODM members and supporters are forming their own small parties like the Pamoja African Alliance which was formed by Kilifi Governor Amason Kingi.

• Declares that just like many other politicians, Raila needs to be swept away under his ‘Fagia Wote’ rallying call. 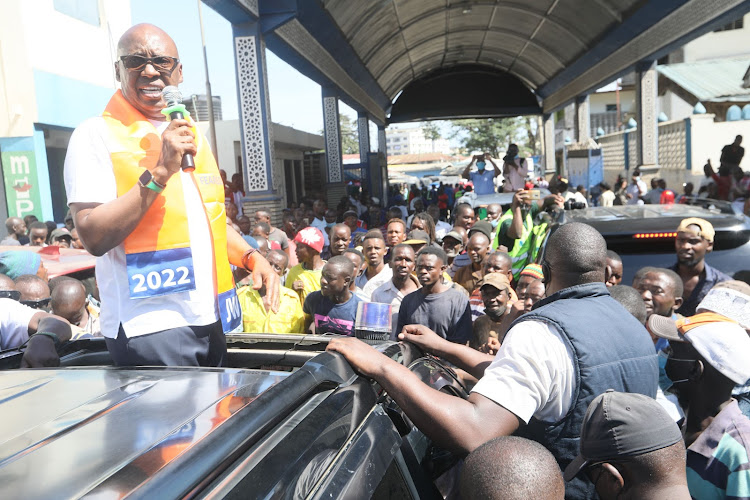 ODM leader Raila Odinga has lost his unifying power and is not fit to lead the country, businessman Jimi Wanjigi has said.

Wanjigi, who is seeking the ODM ticket to vie for president, said that is why ODM members and supporters are forming their own small parties such as the Pamoja African Alliance associated with Kilifi Governor Amason Kingi.

“Many of these parties that are formed, especially the ones here (at the Coast), were in ODM. It goes to test what I am saying, that my party leader is no longer a unifier.

“He is no longer the unifier that he was, so people are breaking away. It is a very sad case,” Wanjigi said at the PCEA Makupa church after the Sunday service.

Apart from Kingi, Tourism CS Najib Balala formed his own Republican Congress Party after ditching ODM, where he was one of the Pentagon members.

Former Kaloleni MP the late Gunga Mwinga ditched ODM for Kadu Asili before taking over Devolution Party of Kenya, where he was the party leader.

Deputy President William Ruto ditched ODM before briefly joining UDM and later forming URP in the runner up to the 2013 election.

The businessman-cum-politician on Sunday said unlike him, Raila has become a divisive figure, despite campaigning under the rallying call ‘Azimio la Umoja’, which insists on unity in diversity.

“I am a unifier. I have stood for everybody, every culture and every person in this republic. I have stood on the right side of history,” Wanjigi told traders at Kongowea market.

Wanjigi said like many other politicians, Raila needs to be swept away under his (Wanjigi's) ‘Fagia Wote’ rallying call.

‘Fagia Wote’ is a call fashioned to appeal to the youth to vote out the old guard and replace them with young and fresh political minds with the ideas that can change the country’s economic fortunes for the better.

Wanjigi said he prefers a two-party system, which he said is easier to deal with and makes parties stronger.

“A two-party state can then debate issues of ideology ad philosophy of a party and the economy rather than regions. Regions should all be represented in those two parties. Let us up the debate,” he said.

The businessman said most of the issues that affect Kenyans cut across.

“My prayer and hope is to build one big giant ODM and I’m the unifier for that party,” said Wanjigi.

He said the party needs to show the world democracy adding that the whole country is looking at what ODM does.

Therefore, he noted, ODM has a responsibility, as one of the oldest strong parties to show the country that it is democratic.

“I, myself, do not intend to stand down for anybody. I want the people to decide at the ballot in Kasarani. The 3,000 delegates choose the party leader. That is where I am going,” said Wanjigi.

He was reacting to Kakamega Governor Wycliffe Oparanya’s intimated stepping down from the ODM presidential nomination race in favour of Raila, who is yet to officially express interest in the presidential race.

He said he has invested his heart, soul, and resources in the party.

He welcomed Raila’s comment that hinted at the price of fuel coming down in the near future.

“It seems he has information we all don’t have. We hope he is correct. The government seems to be with him or in him, we don’t know which,” Wanjigi said.

However, he urged him to help Mombasa county and the Coast region, which he said has been voting overwhelmingly for him over successive elections, to reverse its economic fortunes.

He was referring to the take or pay policy instituted by Kenya Ports Authority, which he said has caused mayhem, pain and anguish to Mombasa and Coast residents.

The policy requires that all cargo imported via sea is taken to the Inland Container Depot in Embakasi, Nairobi from where it is cleared before going to different destinations, including Mombasa, where the port is.

“This has taken away an estimated 40,000 jobs from this region – 8,000 directly and the rest indirectly,” Wanjigi said.

The jobs are mainly on the logistics industry with Container Freight Stations, clearing and forwarding and transport which constituted about 37.2 per cent of the Mombasa economy, which he noted translates to about Sh1.2 billion that has been removed from the county.

“Since my good friend has the capacity to predict that the price of petroleum is going to come down or has information, he should insist that the handshake with Uhuru Kenyatta must remove the take or pay policy which has caused anguish to the community here for almost five years,” Wanjigi said.

He also warned of a plot by MPs to increase the debt ceiling from the current Sh9 trillion to Sh12 trillion.

This, he said, would represent a GDP to debt ratio of 120 per cent, which would only plunge the country into more debt that will only become unsustainable.

He called on Raila to ensure that his ODM troops in Parliament do not approve the proposal “because that ceiling means more pain to all of us”.

“I hope and pray that they listen because if they don’t they shall suffer the wrath of mwananchi in the next election and that wrath shall be wholesome. We shall fagia all of you,” said Wanjigi.

Wanjigi said once Raila declares his stand, they will than agree on fair play in the party.
News
10 months ago
by BRIAN OTIENO Correspondent, Coast Region
Coast
04 October 2021 - 21:00