DON'T WRITE ME OFF

•The ODM deputy party leader likely to give way to Raila for president but hints at bigger role in Coast and national politics.

• He made the announcement as his closest allies on Saturday endorsed Raila for the ODM ticket to run for president in 2022. 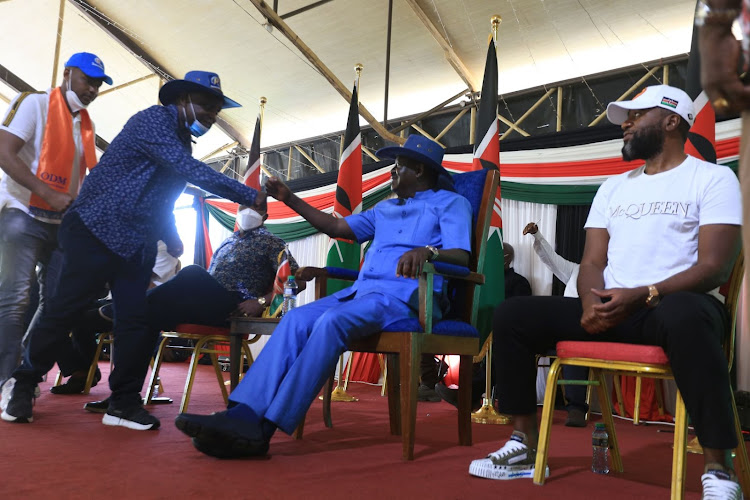 Mombasa Governor Hassan Joho has told off critics who say his influence in the Coast region is waning ahead of the end of his two terms in 2022.

The ODM deputy party leader, who has said he wants to run for president, on Saturday hinted will step aside but plans for a bigger role in Coast regional and national politics.

“You need to know that I am not bankrupt of ideas,” Joho said at the Wild Waters Complex during the ODM Coast delegates conference. It is also the the Coast Leaders and Professionals Azimio la Umoja Forum.

It brought together by more than 600 ODM delegates from  the six Coastal counties and other political and professional leaders from the Coast and beyond.

Joho, who appeared to back down on his presidential ambitions in favour of Raila, said he is not afraid to retire from Mombasa politics as governor.

“I have a duty to speak for the Coast people,” the flamboyant governor said.

“We must be ably represented in government when decisions are being made,” Joho said.

Kisauni, Mvita and Nyali have the highest number of voters.
Counties
1 month ago

“All of us are heading in the same direction.”

The declaration from the Azimio la Umoja Forum hinted at possible partnerships with other parties based at the Coast for a united front.

This was demonstrated by the presence of Vibrant Democratic Party leader Hezron Awiti.

Awiti, a close friend of Raila, began his active political career in ODM when he wanted to run for Nyali MP.

He moved to Wiper, however, after claiming there were plans to rig him out of the nominations. He won on the Wiper ticket.

In 2017, he wanted to succeed Joho as governor and sought the Wiper ticket. He was pushed aside and formed his own VDP party in an unsuccessful effort to capture the seat.

“We must bring all the people together,” Raila said.

Awiti said Raila is best suited for the Presidency because of his wisdom.

He said Coast people want someone who understands their problems and can solve them.

"Raila will not let people down," Awiti said.

Joho led Coast leaders in declaring they want to be partners and not followers in government.

Ruto was in Kwale for a fundraise for Muslim clerics while Raila the burial of one an ODM grassroots leader.
Counties
2 months ago

"We no longer want to be seen to be begging all the time. We want to get our fair share legally," Joho said.

Raila responded by declaring he is not interested in followers anymore.

"We can do greater things together than as  a one-man show."

Godana said Kenya is enjoying peace because of Raila and said the ODM leader has fought for Kenyan people for a long time from outside State House.

"This time we want you to fight for Kenyans from inside State House," he said. "We are not going anywhere. We are with you to the end," Godhana said.

Mvita MP Nassir said Raila is being unfairly blamed for all the country's woes because he is the tree with the healthiest fruits.

He said the ODM leader is the only one that feels the pinch, like ordinary Kenyans and called him "the right saviour".

"Do not fear any spear directed at you. We are the shield that will protect you. Protecting you is protecting the people of Kenya," Nassir said.

He said being the longest-serving detainee in Kenya, Raila is the best to protect human rights.

Shahbal asked Raila to prioritise the Coast agenda, saying the region has the potential to drive the economy because of its natural resources.

"Many projects have been started and abandoned halfway at the Coast. In the first six months of your presidency, ensure the Pwani agenda is prioritised," Shahbal said.

Raila said the Coast has suffered injustices for a long time and it's time to right the wrongs once and for all.

Taita Taveta residents, he said, have felt abandoned by the government for a long time because of the frequent and uncompensated human-wildlife conflicts that have cost hundreds of lives. Many people have been maimed.

"They are owed over Sh14 billion in compensation," Raila said.

They also have not reaped benefits from Tsavo East and West national park, he said..

Forcible disappearances at the Coast have left families distraught and their trust in government is gone, Raila said.

These issues manifest a culture of impunity, he said.

"We are here to finish what we started years back — to give Coast people what they deserve," the ODM leader said.

He said Coast people were the major force pushing for devolution, but with BBI's nullification by two courts, the region stands to lose Sh22.6 billion.

BBI had proposed a mandated increase in county allocations from the current 15 per cent to 35 per cent. Those funds would build more schools, hospitals, roads and other infrastructure.

With investment, the blue economy can spur development, the ODM leader said.

Raila said all Kenyan children must have equal opportunities in jobs and education.

In 30 years, he said, China managed to move 300 million people out of poverty.

Kenya can move 20 million people from poverty to comfort in the same period or less, depending how the country help its youth.

About 70 per cent of population is younger than age 35 and is the most productive human resource.

He later addressed crowds at Kengeleni in a roadside campaign.