State to establish road construction training base in Taita Taveta

The Kenya Institute of Highways & Building Technology has announced plans to establish a regional training base in Taita Taveta county. https://bit.ly/3lvK3l6 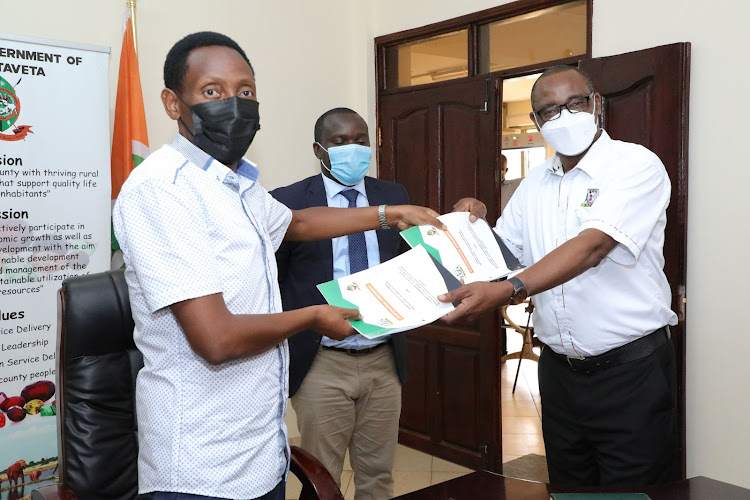 The Kenya Institute of Highways & Building Technology has announced plans to establish a regional training base in Taita Taveta county.

KIHBT on Wednesday signed a cooperation deal with the county government that will see the institution train hundreds of youth on high and low-level skills in the region.

The institute's deputy director Geoffrey Githiri said the base will be a focal point for the six coastal counties and will help tame rising unemployment among youth.

The project, Githiri said, will be funded by the World Bank under the East African Skills for Transformation and Regional Integration.

“The county government shall be a facilitator of the project. Performance indicator is the number of people to be trained. Youths shall be equipped with necessary skills to work even outside the country,” Githiri said during the signing of the memorandum of understanding at county headquarters in Mwatate.

He said the county’s hilly terrain and proximity to neighbouring Tanzania have made it ideal for the institution to establish a Coast regional training base to expand the trainees' employability to East African countries.

Taita Taveta boasts of a road network of approximately 5,000km being maintained by the county government.

“We shall be particularly keen to develop skills in the road sector as part of a wider outreach programme in terms of skills development within the country,” the deputy director added.

KIHBT is a public institute under the State Department of Infrastructure. It is mandated to build capacity for the public and private sectors.

The institute was originally established as a training division within the Public Works department in 1948.

Githiri said it is now a major skill improvement training centre in the East African region, well-staffed and with an annual trainee turnover of more than 3,000.

Taita Taveta Governor Granton Samboja underscored the need for partnerships between the county government and stakeholders to ensure the devolved unit achieves its vision in industrialisation and infrastructure.

Samboja lauded the KIHBT deal saying it will address the youth unemployment.

“Any sober leader must be worried about the number of unemployed youth. If the unemployed youths are not well thought and sorted out, then there will be a problem in the years ahead,” he said.

The governor said training contractors will be a great boost to the county’s agenda of improving infrastructure.

Samboja said the collaboration between the county and KIHBT is long-term and will eventually enable the establishment of the institution’s new Coast region campus.

“Our target is to create an environment for the institution to set up its fifth campus in the county. It shall be a centre for the region,” he said.