•In December last year, doctors downed their tools over delayed salaries, non-remittance of statutory deductions and lack of promotions. 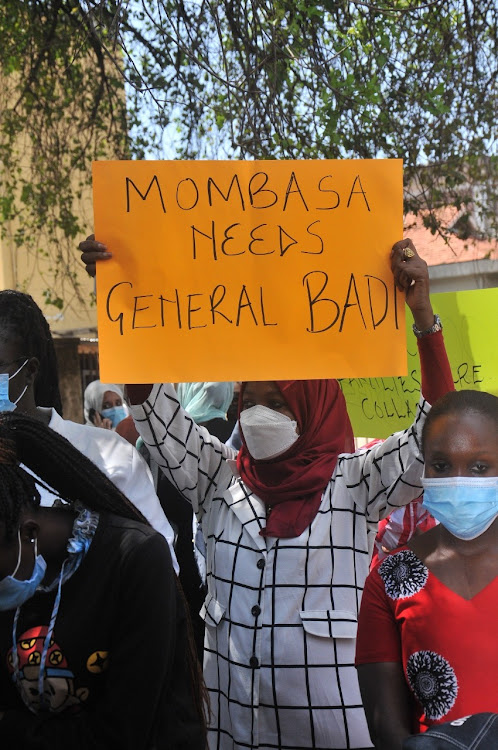 PAY OUR SALARIES: A section of Mombasa doctors protest at the Coast General Teaching and Referral Hospital over delayed salaries on Wednesday.
Image: LABAN WALLOGA

Mombasa doctors on Wednesday threatened to sue Governor Hassan Joho's administration for not honouring the return-to-work agreement signed in January.

However, on January 15 the doctors signed a return-to-work agreement with the county government.

On Wednesday, through the Kenya Medical Practitioners, Pharmacists and Dentists Union, the doctors said the county had failed to implement the issues they had agreed on before returning to work.

They had agreed that all doctors due for promotion will receive their letters no later than March 21 and be effected on April 21 on their payroll.

The county had also promised to commence payment of the statutory deductions within the shortest time possible, however, there are still pending arrears to date.

They have also not been paid their July and August salaries.

KMPDU national chairperson Abidan Mwachi said any person who signed the return to work agreement on behalf of the county should prepare for a legal battle.

“We want to advise anyone who signed the return to work agreement with the health workers, that we believe in the judicial system and we are coming for you individually,” he said.

He said that patients are suffering because of incompetence from certain individuals.

“The national office is very concerned about Mombasa, it remains unenviable as number one top of the list of impunity,” Mwachi said.

“It will be wise that Mombasa is handed over to the military to manage it.”

“The doctors will take the county government to court for breaching the agreement we signed during the return-to-work in January,” Nassir said.

“They have failed to remit the monthly statutory deductions, violated the labour laws and perennial delay in paying our salaries.”

Nassir said they will sue the individuals who signed the return-to-work agreement on behalf of the county government.

“We must hold everyone accountable,” he said.

The KMPDU national office said it will follow up with Ethics and Anti-Corruption Commission to ensure that the people involved are held accountable.

Hassan Mkuche, the KMPDU Mombasa branch chair, said for the last five months their loans deductions have not been paid, leading to their names being listed with the Credit Reference Bureau.

They also can’t access health services because the county has not been remitting to the National Hospital Insurance Fund.

“We cannot continue working without pay. Until they release our salaries, pay the monthly statutory deductions, we will not go back to work,” Mkuche said.

The doctors urged all the patients to seek treatment in the hospitals in the neighbouring counties of Kilifi and Kwale either at Mariakani, Kilifi or Msamweni hospitals.

“All patients should seek medical treatment from neighbouring counties which are doing so well. It is not a must they come to a place where doctors are not motivated to deliver quality services,” Mkuche said.

He said all health services have been affected and everything is at standstill.

“We cannot admit patients yet we have not been paid,” he said.

He said Mombasa has 200 doctors and more than 1,200 health workers who have not been paid for the last three months.

Nassir said that they have tried to engage the county officials diplomatically and given them a lot of time to resolve the issue, to no avail.

“The first meeting we had with the county government was in June and now we are in September, they had promised that they are going to sort our issues, but nothing has been done instead they keep taking us in circles,” he said.