They staged protests on the vast land saying they will not move from their ‘ancestral land’.

• The Kilifi county government had initiated mediation talks between the residents and the private developers.

• They have now rejected the mediation talks saying they would prefer the matter, which is pending in court, to move to its logical conclusion. 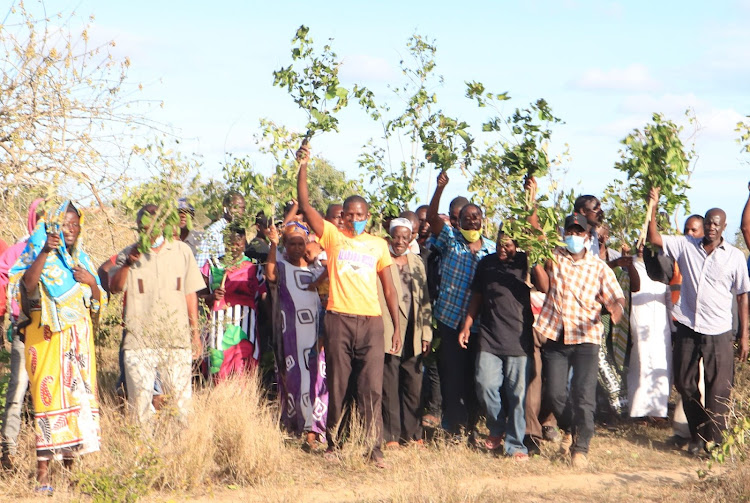 Suddenly, the parcel of land he has called home at Madzimbani-Matangoni settlement scheme, Mariakani, Kilifi county, for the entirety of his life, was claimed by a private developer.

His family of more than seven people have nowhere else to call home.

“It is shattering to have someone tell you your home is not your home anymore,” said Birya on Wednesday.

She said her parents were buried in the area.

However, in 2014 it emerged that the parcel belonged to one Tsawa Ngala, who is now deceased.

Birya, Mbudzya and over 50,000 other residents living in the 7,100 acres of land then sought the intervention of the courts.

However, the residents now say there is a scheme to evict them from the land by more private developers.

The Kilifi county government had initiated mediation talks between the residents and the private developers.

On Wednesday, they staged protests on the vast land saying they will not move from their ‘ancestral land’.

They have now rejected the mediation talks saying they would prefer the matter, which is pending in court, to move to its logical conclusion.

The residents have had to contribute the little they have in order to afford a lawyer.

On the land are social amenities including homesteads, schools, churches, mosques, farms and community graveyards where there are more than 70 graves.

On July 14, 2019, then Lands PS Nicholas Muraguri wrote to the then Kilifi Lands Adjudication and Settlement Officer, Mary Muteti, inquiring about the authenticity of a title deed for the vast land in the name of Ngala.

In the letter, Muraguri indicated that the issuance of the title deed in the name of Ngala had led to serious boundary disputes involving various clans claiming their land was included in the mother title.

Ndaro Zuma Rimba, a youth leader, disputed the legality of the title deed saying an individual could not have acquired such huge parcels of land yet he was relatively unknown.

“How did this Tsagwa acquire such huge parcels of land. Was he a king of sorts?” posed Zuma.

Kilifi is one of the most rapidly developing counties in Kenya with several high profile real estate firms rushing to buy land in the vast county that still has huge parcels of unoccupied land.

This is why there are numerous land disputes in the county.

In some cases, youth grab land from their own fathers, using the ‘witch’ tag to have them killed so they could get the land.

“There is a case pending in the Appellate Court. Let the Judiciary administer justice,” said Zuma.

The youth leader said in the Mijikenda traditions, one is buried on land that belongs to them of their community.

The presence of the graves on the parcel means the land belonged to the community members, he argued.

“This is not the case with Tsagwa. His family was buried far away from Mariakani. This raises suspicion that he was just used by grabbers keen to get access to this prime land,” he said.

Another resident, Kazungu David Chai, said that they are not backing out from the case they lodged and will abide by the court's decision.

''No one should try any form of coercion or intimidation. It will not work. There is so much at stake should this land be grabbed,” he said.