Kenya will not surrender its soil to anyone — Uhuru

•The training brings together troops from the different security formations in the country. 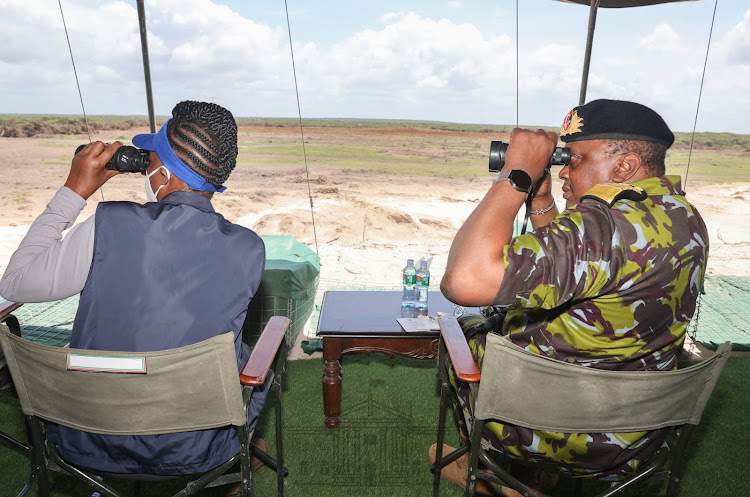 NOT AN INCH: President Kenyatta with Defence CS Monica Juma in Lamu on July 21
Image: PSCU

President Uhuru Kenyatta has said Kenya will not cede even an inch of its soil to anyone.

In what appeared to be a reference to the Kenya-Somalia maritime dispute, Kenyatta said Kenya is ready to defend its territorial integrity just as it has defended the peace of other countries.

He spoke on Wednesday when he visited the multi-agency team of Kenyan security officers undertaking joint operational training in Boni Forest, Lamu.

Kenyatta said although Kenya is a peace-loving country, it will not allow an inch of its territory to end up in the hands of another country and will continue to jealously guard its borders.

“We will not accept anyone claiming ownership of any part of our land. Just as we have respected the boundaries of other countries, we expect that our borders and land are equally respected,” the President said

“We are a country that loves to live in peace with its neighbours. Hence why we have been part of various peace support initiatives in other countries.”

Kenyatta said the multi-agency approach would help enhance the effectiveness of the country’s security apparatus.

He said the approach is the only sure way of collaboration among security agencies in the country to effectively deliver.

“I am happy that this multi-agency training has taken place, as the forces get to know each other and to collaborate in the training,”  Kenyatta said.

The Field Training Exercise is part of a broad government approach to the delivery of security services by leveraging on interoperability of Kenya’s security assets.

The FTX, which is coordinated by the Kenya Defence Forces, brings together troops from the different security formations in the country.

The President, who was accompanied by Defence CS Monica Juma, witnessed drills by officers who’ve been training for three weeks and taken on a tour by Chief of Defence Forces General Robert Kibochi.

He also thanked the officers for the various social initiatives aimed at uplifting the wellbeing of host communities.

“I would also like to thank you all for participating in this training and also for the social responsibility that you have participated in. Restoring hospitals, drilling boreholes, renovating schools and offering medical interventions,” he said.

“These gestures go a long way in changing the mindset and perception of the security agencies among wananchi.”

He assured them of support by taking care of their welfare and urged the multi-agency team to keep improving the training to make it more effective.

“I would like to urge the authorities involved to increase and keep modifying competencies to ensure we are mission ready,” he said.

Kibochi thanked the President for the government’s continued support for the multi-agency training saying, his visit will serve to motivate the troops.

He said the training which began last year had gone a long way in enhancing operational capacity within the country’s security agencies and assured the President that the officers were adequately trained and equipped to effectively protect Kenya’s territorial integrity.

These areas have been affected by terrorism, which has led to less development and fears among many.

The areas are near the Kenya-Somalia border, which makes it easier for al Shabaab to attack at will.

Boni Forest in Lamu is an operation zone as the national government has since 2015 conducted a multi-agency security exercise dubbed Linda Boni, which is aimed at flushing out al Shabaab militants believed to be hiding there.

The terrorists have also been attacking northern regions affecting operations at large.