Ruto was in Kwale for a fundraise for Muslim clerics while Raila the burial of one an ODM grassroots leader. 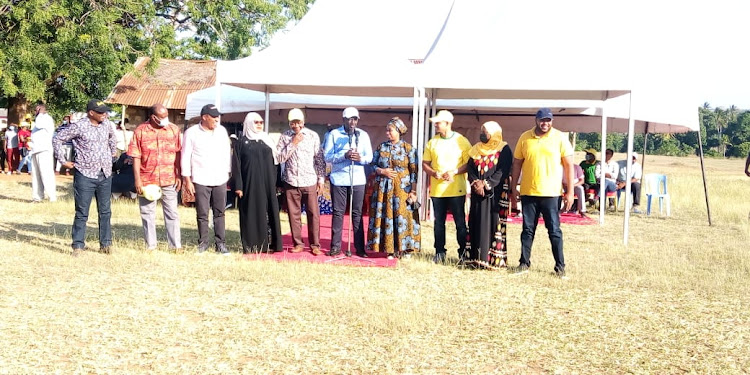 Deputy President William Ruto and his political nemesis ODM leader Raila Odinga on Sunday came face to face in Kwale county where they tore into each other.

Raila was attending the burial of former ODM grassroots activist Hassan Chitembe in Tiribe in Matuga, whereas Ruto was attending a fundraiser for Council of Imams and Preachers of Kenya in Lunga Lunga.

Ruto’s two-day tour at the Coast began in Kilifi on Saturday at the burial of Bishop George Mwangome Chipa, whom he described as a true faith leader whose sermons were authentic, targeted, rich and thought-provoking.

He then proceeded to Mombasa in Nyali where he engaged and supported more than 500 Kongowea and Mackinnon markets traders whose businesses were destroyed by a fire recently.

In Sunday’s functions, Raila insisted that the clamour to change Kenya's 2010 Constitution is still on, but Ruto said Kenyans will not be fooled again after a four-year circus in the name of Building the Bridges Initiative.

“What makes me happy today is that ODM is still very strong in this region and that the people are still supporting the BBI. I want to categorically state that BBI is not to divide the country, but rather to unite us,” Raila said.

But Ruto told Lunga Lunga residents that BBI is meant to create positions for a few individuals and increase the wage bill burden on Kenyans.

Whereas Raila said Kwale county is still grappling with land matters, poor health, roads infrastructure and unemployment, Ruto said the government has done much in the last nine years in addressing those issues.

“The locals, through our ODM leaders, have told me the issues that affect them. Land has been an issue for a very long time, youth unemployment, water provision, health and road infrastructure,” Raila said.

“I’m going to convey this message to President Uhuru Kenyatta, because I’m not part of the government, but I know it will be addressed”.

He was accompanied by Kwale Senator Issa Juma and other grassroots leaders in Matuga.

Ruto, who was several kilometres away, told the Lunga Lunga residents that in nine years of the Jubilee government, they have been able to build roads in Kwale, allocate funds to dams' construction and empower the youth.

“I believe I'm the only national leader who has been to Kwale more times than anyone else. We have the Sh1.2 billion Makamini dam in Kinango,” Ruto said.

Ruto has sustained a charm offensive to dislodge Raila from the grip of the critical region.

In the last two months, Raila has been to the Coast four times. He was on June 16 hosted by Mombasa Governor Hassan Joho for the launch of the catheterisation laboratory at Coast General Teaching and Referral Hospital.

A week earlier, he had private engagements with organised groups in the region.

A week after the launch of the lab at Coast General, Raila returned to Mombasa for the launch of Mvita CDF National Hospital Insurance Fund issuance of cards to the locals. He was hosted by Mvita MP Abdulswamad Nassir.

Ruto was last in the region on May 22 when he attended a Coast economic regeneration forum that brought together leaders from six coastal counties.

On Saturday in Kilifi, Ruto told mourners during the burial of Bishop Chipa that by God’s grace they will form the next government.

Raila and Ruto have been using almost similar strategies of meeting organised groups to sell their agenda and look for support.

Two weeks ago, Raila was scheduled to meet with Luos and Luhyas in Mombasa, but the meeting was to be private away from the glare of the media. However, he sent a representative and could not attend in person allegedly because of a tight schedule.

On Saturday, Ruto met with Kongowea and Marikiti traders in Nyali. The meeting was closed.

Pwani University lecturer Hassan Mwakimako told the Star that Ruto’s influence at the Coast is increasing every day because of the strategies employed.

“Traditionally, the Coast region has been an ODM zone, but there is an underground current called UDA that is slowly sweeping the region. Many people will be shocked by the voting pattern in the region next year,” Mwakimako said.