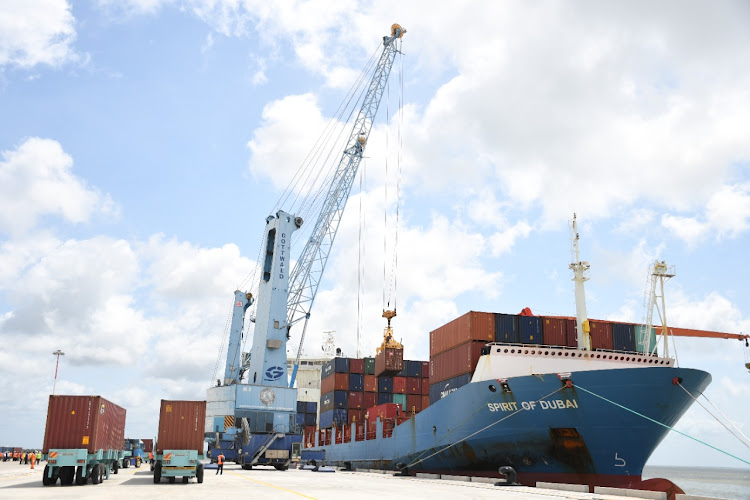 Transshipment Cargo being loaded on MV Spirit of Dubai at the Lamu Port on July 19.
Image: CHARLES MGHENYI

The Kenya Ports Authority has set aside Sh4 billion for the purchase of equipment for the newly launched Lamu Port.

Acting KPA managing director John Mwangemi on Monday said the port will have modern technology and will be a leading port for transshipment business in Africa.

On Monday, the port received its second vessel, MV Spirit of Dubai, which had arrived to carry transshipment cargo destined for Jeddah Port in Saudi Arabia.

Last Thursday, the port received its first commercial ship, MV Amu 1, which brought cargo from Zanzibar to Lamu, destined for the port of Jeddah in Saudi Arabia.

Speaking to the press during the reception of MV Spirit of Dubai, Mwangemi said they have already begun the procurement process for the equipment from the key suppliers abroad.

The first batch of equipment will be received at the port within the next four months, he said.

"We have already started the procurement process of equipment and we expect to start receiving them within the next four months, throughout April next year," Mwangemi said.

Captain Geoffrey Namadowa, who was in charge of shipping port handling equipment from Port of Mombasa to Lamu from April this year, said most of this equipment is bought from China, Germany, and Sweden.

"The ship-to-shore cranes that are at the Mombasa port are from China, the rubber tyre cranes and mobile harbour cranes are from Germany. We are waiting for a tender to be floated to know which company and from which country will be awarded," Namadowa said.

He said all the procurement laws will be followed.

Operations at the Lamu port were launched on May 20 by President Uhuru Kenyatta.

Two commercial vessels have so far docked at the facility.

The Monday's reception of the MV Spirit of Dubai, which is operated by CMA CGM international shipping line, was witnessed by KPA officials and senior government officials.

The vessel arrived to pick 62 containers that were offloaded last Thursday by MV Amu 1. The cargo is from Zanzibar destined for Saudi Arabia.

Amu 1, which is operated by Lamu Shipping Limited, became the first commercial ship to arrive at the port with transshipment cargo after a 35-hour voyage from Zanzibar.

The vessel, which has a capacity of 124 TEUs, had on board 62 containers—41 forty-foot containers and 21 twenty-foot containers, of a variety of agricultural products from Zanzibar destined for Jeddah, Saudi Arabia.

The cargo vessel plies the East African Coast between Djibouti in the Gulf of Aden and Maputo in Mozambique, including the Islands of Zanzibar, Pemba, Mayotte, and Comoros.

Last week, a delegation from the CMA CGM, a French Shipping Company, visited the Lamu port on a familiarisation tour and expressed interest to invest in the new facility.

They agreed to regularly deploy vessels to Lamu port.

On Monday, CMA CGM East Africa deputy general manager Daniel Sepetu said they have tested the systems at Lamu port, which has been efficient.

"We are the pioneers and have tested the KPA and KRA systems. We managed to post the documents through the Integrated Customs Management System and the whole process went on smoothly," Sepetu said.

KPA general manager in charge of Lamu port, Engineer Abdullahi Samatar said the arrivals of these ships signifies that Lamu is ready for business.

“We, therefore, expect more transshipment traffic to this port, which has a competitive advantage in terms of geographical position and capacity to handle bigger vessels," Samatar said.

To attract more business to Lamu, KPA said there is an ongoing discussion to reduce tariffs and tax rebates that will make the port an attractive logistics hub.

He added there is a discussion ongoing among stakeholders to explore other tax break options.

KRA has also deployed the new Integrated Customs Management System at the port to ensure faster clearance of cargo and enhanced turnaround time to secure a competitive advantage in the shipping industry and pull more business to the port.

“In addition, the management of KRA has deployed young, dynamic and experienced officers to offer efficient customs services to support the budding business at the new port,’’ he said.

Tonui described the receipt of the consignment at the Lamu port as “a vote of confidence by the shipping industry.”

“The dream of making Lamu, the port of choice for exports, imports and transshipment hub is becoming a reality,” Tonui said.

Lamu Shipping Limited, which became the first to deploy a commercial shipping vessel to Lamu port, said they are satisfied with operations at the port.