No rest for the dead as Makaburini is turned into dumpsite

There are at least 100 graves at the cemetery and majority have disappeared under mounds of garbage. 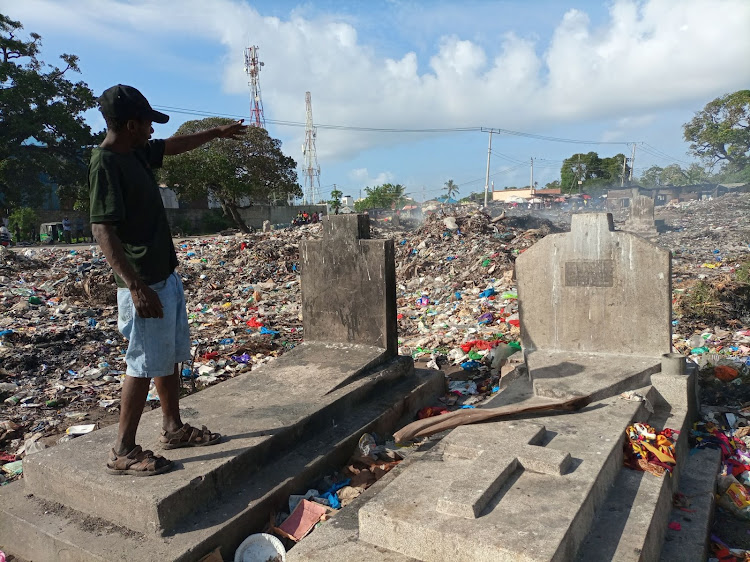 Families who have interred their loved ones at the Makaburini cemetery near Kongowea market in Mombasa are disturbed by the state of neglect of the public graveyard.

The cemetery sits on five acres and has been divided into two by a cabro road from the Makuti stage along the Mombasa-Malindi highway to the Kongowea market.

On the left side from the highway the graves are mostly well maintained.

It is the right side that has become an eye sore. Almost the entire side has been turned into a dumpsite.

There are at least 100 graves in the cemetery and the majority have disappeared under growing mounds of garbage.

Families can no longer visit their loved ones’ graves. They are nowhere to be seen.

They have been replaced by garbage, and sometimes the occasional sight of a few bones that wild dogs, cats and other scavengers fight over.

Some of the graves, especially those that had concrete slabs, have been destroyed.

It is not clear whether it is by forces of nature, vandals or the county trucks that collect the garbage from time to time.

Bruno Mahoka, who has lived in the neighbourhood for over 60 years, told the Star he has buried his wife, brothers and children at the cemetery.

However, he cannot no longer tell where their graves are.

“This place has been turned into a dumping site. All my graves have been covered with garbage,” said Mahoka.

“I have to look for my graves every time I come here nowadays. I will have to rebuild them now, which is an added cost,” said the depressed Mahoka.

Trips to the county government offices have yielded no help, he said.

A Catholic, Mahoka has been religiously holding prayers for his dead family members every November 2 when Catholic priests visit to hold special prayers for the departed souls.

“We usually prepare our graves well for the priests to bless them. But this time I don’t know what we will do. We don’t see our graves,” he said.

Christopher Njeru, a Kongowea resident, said he buried his mother at the cemetery.

“Now, I cannot come tend to it as I used,” said Njeru.

At first, he used to clean the area around the grave.

However, he travelled out of Mombasa for about four months and when he came back the grave had ‘disappeared’.

Jack Mbandi, from Our Lady of Fatima Kongowea Catholic Church’s Peace and Justice department, said it is sad that the dead are disrespected nowadays.

He said in the process of the collecting the garbage using excavators, parts of the graves are destroyed.

“This brings back painful memories for the bereaved because they feel their loved ones are being oppressed. It opens the wounds for them,” Mbandi said.

He said a wall should be erected around the cemetery after the garbage is removed.

The side that has been turned into a dumpsite is full. No more burials are conducted there.

Peter Bruno buried his mother, an aunt, a brother and two uncles in the cemetery.

He accused the authorities of sleeping on the job.

He said both the authorities and those dumping garbage on graves are disrespectful of the deceased and the bereaved.

“Let graves be graves and not dumping grounds,” Bruno said.

“They (dumpers and authorities) will also sleep one day and they won’t want to have this done to them.”

Mombasa county environment executive Godfrey Nato said the area is not a designated dumpsite and it is wrong for anyone to dump garbage there.

“I don’t think we can decide to put garbage on people’s graves,” said Nato, denying accusations that they have allowed people to dump garbage there.

He said he will lead a team of his officers to the site to assess the area and see the extent of the damage that has been done by garbage dumpers.

Most of the time, Nato said, such sites start from a very small area where someone illegally dumps their garbage at a place before others join in when nothing is done about it.

“There are chances that people started (dumping) on a place where there was no grave and then it spills over,” Nato said.

The displaced, including fruit and vegetable vendors, operated from the cemetery, placing their goods atop graves. 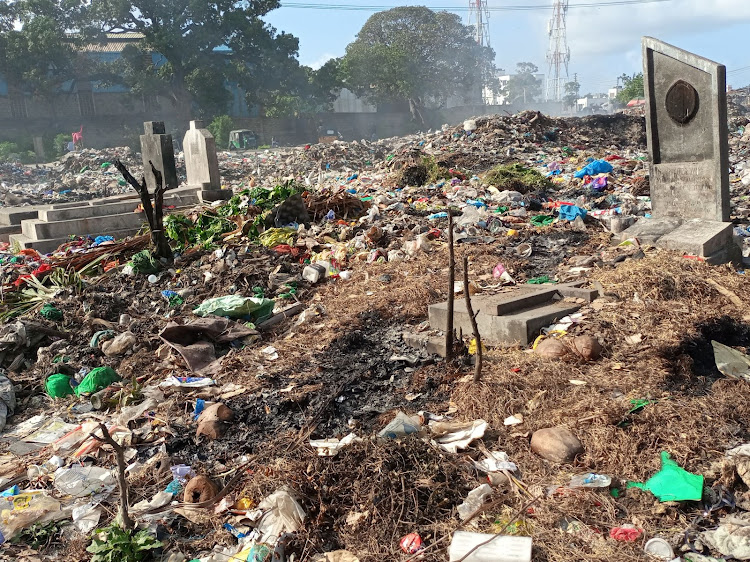