•President Uhuru Kenyatta on May 20 launched the first berth of the Lamu Port.

•In May 2018, the first phase of Dongo Kundu was also lauched. 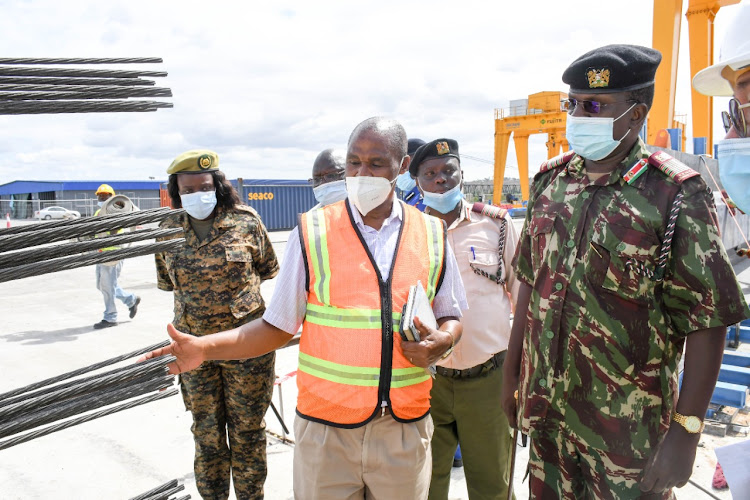 The massive investment by the national government on the infrastructural development at the Coast is transforming the region, Coast regional coordinator John Elungata has said.

Elungata said the Sh40 billion Lamu Port, the ongoing Sh24 billion phase II of the Dongo Kundu bypass, the construction of the Mombasa Airport road, the planned Kibarani bridge among other projects will change the face of the region.

According to Elungata, the huge resources committed by the government for the infrastructural improvement and other critical projects have positioned Coast as an attractive destination for investment, trade and tourism.

“The construction of the Lamu Port and other key infrastructural projects will provide job opportunities, boost business and other economic activities,” he said.

Elungata, who is also the chairperson of the Regional Development Implementation Coordination Committee, on Thursday led the committee on an inspection tour of the construction of the Dongo Kundu bypass.

The bypass, also known as Mombasa Southern bypass, will connect Mombasa to the South Coast in Kwale.

The bypass, whose first phase of Sh11 billion was completed and launched in 2018 by President Uhuru Kenyatta, includes the construction of a series of roads and bridges linking Mombasa West to the South Coast in Kwale.

Elungata said 70 per cent of the workforce in the project are residents.

It aims to ease transport, boost industrial development, and accelerate cargo movement from the Mombasa Port and also provide an alternative to the busy Likoni crossing channel.

The deputy project director Eustace Mutea said that phase two of the bypass is progressing well and will be completed in 2024.

“We might complete the project ahead of schedule because we have mobilised all the required equipment and put in place the necessary logistics,” he said.

Two bridges will be constructed, one at Mwache 900m long and another at Mteza of 1400m long.

A Special Economic Zone project, which was launched in 2019, is expected to develop Mombasa into a world-class industrial hub.

On May 20, Uhuru launched the first berth of the Lamu Port.

Berth two and three will be completed in July and October respectively.

So far, 100 youths have already been employed at the facility.

Maritime stakeholders said the Lamu Port compete with the Port of Salalah in Oman, Durban in South Africa and Djibouti.

Last week, Kenya Ports Authority said plans to compensate 4,734 fishermen, who have been affected by the Lamu Port, have already started.

The fishermen will benefit from Sh1.7 billion payout.

At the same time, the region is also a beneficiary of other projects such as the 114km Garsen-Witu-Lamu Highway on the north coast and Shimoni -Vanga Road projects in Kwale.

Post a comment
WATCH: The latest videos from the Star
by CHARLES MGHENYI Chief Correspondent, Coast Region
Coast
31 May 2021 - 22:00
Read The E-Paper