Among the destroyed are the Mwamdudu secondary school, dispensary and houses.

• Mwero said bulldozers arrived at around 1:00 am and started to flatten houses forcing residents to sleep out in the cold.

• The residents alleged that the case was in court and were not served with any notification letter to evacuate. 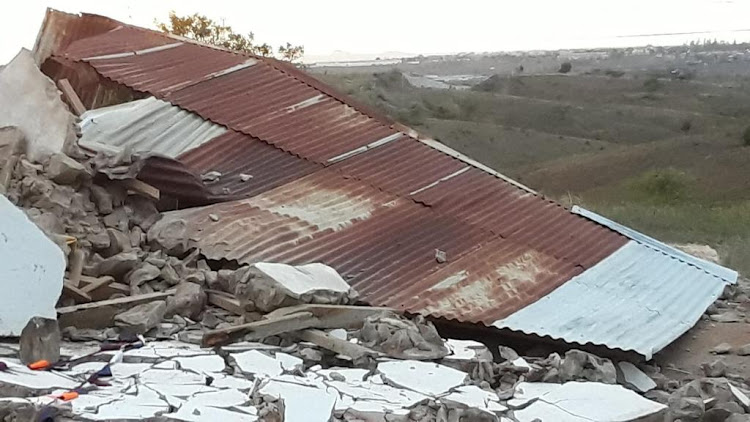 DESTRUCTION: One of the houses that were demolished at Mwamdudu in Kinango sub-county, Kwale on Friday May 7, 2021.
Image: SHABAN OMAR

At least 200 residents have been rendered homeless after a forceful eviction from a disputed land at Mwamdudu, Kasemeni ward in Kinango sub-county.

It is alleged that the evictions were conducted under the watch of armed police officers.

The residents claimed about eight land cruisers and two lorries drove by the area past midnight carrying officers on full riot gear.

Led by Hamisi Mwero, they said bulldozers arrived at around 1:00 am and started to flatten houses forcing residents to sleep out in the cold.

"Our property was destroyed by big machines that consumed everything in their vicinity, " he said.

Among the destroyed are the Mwamdudu secondary school, dispensary and houses.

Mwero said they were being evicted by a private developer who claims ownership of over 500 acres of land.

The dispute is believed to have started back in 2014.

The residents alleged that the case was in court and were not served with any notification letter to evacuate.

"The case has not yet been determined but we are surprised to be forcefully evicted without legal notice, " said Mwero.

Mwamdudu secondary school teacher Renson Mazeras said they have incurred huge losses saying some livestock got lost during the destruction of property.

The residents said they couldn't salvage anything as the demolition caught them unprepared.

They condemned that act calling it inhumane and a violation of human rights and access to justice.

"Why didn't they come during the day, knowing we have children and old people this is unconstitutional, " Mazeras said.

The local maintained that it is their ancestral land and want the government to intervene for justice to prevail.

Earlier in the day the angry residents took it to the road and disrupted transport activities at Bonje area past Miritini in Mombasa blocking the Mazeras-Nairobi-Kilifi highway.

According to the Rabai chief Antony Jabao, it took the intervention of police officers who were deployed in the area to restore peace.

The residents had lit fire on the road in protest of the demolition.

Cases of land wrangles in Kwale have become a major headache to both the county government and the locals.

In January over 1000 families at village in Diani were left homeless after their houses were flattened by an alleged private developer.