• The head-on collision accident involved a Garissa-bound Muhsin Bus and Sabaki Sacco minibus at Kwa Mkikuyu in the Kizingo area, about 12km from Malindi town.

• Kilifi Governor Amason Kingi confirmed that he lost six of his county staff in the accident. The staff routinely used the Sabaki minibus to commute to work. 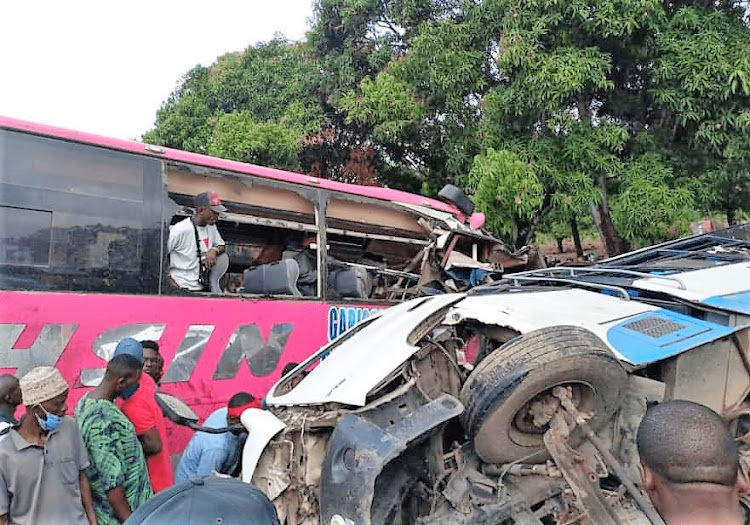 A section of Kilifi leaders are demanding the arrest and prosecution of the contractor on the Mombasa-Malindi highway.

This is after an accident left 15 people and and others critically injured on Wednesday morning.

The head-on collision accident involved a Garissa-bound Muhsin Bus and Sabaki Sacco minibus at Kwa Mkikuyu in the Kizingo area, about 12km from Malindi town.

Other casualties who needed critical care services were rushed to Mombasa. The stretch has been a deathtrap to motorists, especially during routine maintenance work.

Kilifi Governor Amason Kingi confirmed that he lost six of his county workers in the accident. The staff routinely used the Sabaki minibus to commute to work.

“The travellers confirmed dead and injured were members of staff in the Kilifi county government, who were travelling to work in Kilifi from Malindi town where they stay,” Kingi said.

The governor pointed a finger at the road contractor, whom he blamed for taking too long to complete the section of the highway.

“The stretch of the road where this accident occurred has been under construction and expansion for months, with no end in sight,” Kingi said.

He spoke after visiting the scene of the accident and the victims in hospital. Kingi said the ongoing works narrowed the road and limited options for motorists seeking to manoeuvre.

He urged the Kenya National Highway Authority to move with speed and ensure that motorists remain safe on that stretch as its personnel continue with the work to full completion.

Kilifi North MP Owen Baya called on the government to make public the primary cause of the accident, adding that the contractor should be prosecuted for murder if found culpable.

“It is sad to imagine that the accident was caused by the narrowing of the road. Deep excavations were done on both sides of the road by the contractor, who overstayed on the project,” Baya said.

He blamed Kenha for delaying the dualling of the highway.

In February, the national government said the project was in the procurement stages and was expected to start soon.

Malindi MP Aisha Jumwa,  who visited the hospital and mortuary to console the victims, called on the government to arrest the contractor.

“The contractor is to blame for the accident as the road was excavated and abandoned for months which makes it challenging for motorists along the road,” she said.

Jumwa asked Kingi to waive the hospital and mortuary fees for the victims.

“If the county government will not waive the fees, I would support the families to ensure the hospital bills are paid. I will also assist those who lost their loved ones in burial arrangements,” she said.

Kilifi county commissioner Kutswa Olaka also blamed the contractor and urged him to speed up the work to avert further accidents.