•The Sh110 million European Union-funded plant is aimed at boosting the value addition chain of banana production and food security in the arid and semi-arid areas of the county.

•Farmers produce at least 125,000 tons of banana annually on the 2,080 acres under banana plantation. 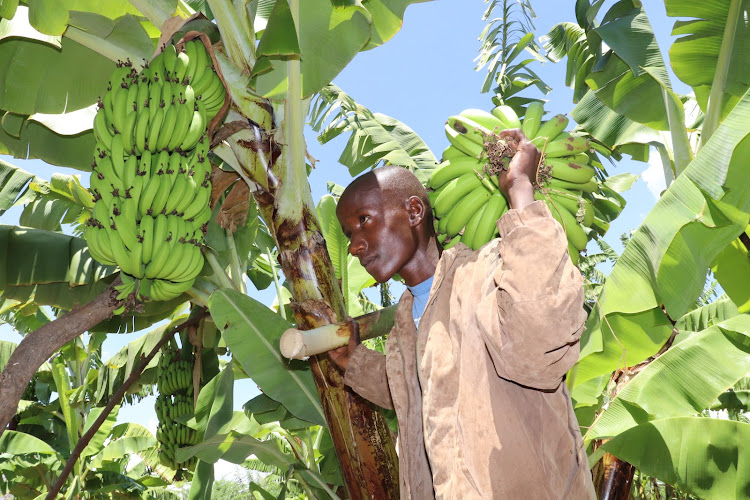 PRODUCTION: Banana farmer Issac Mutua carries a bunch of bananas from his farm at Kitobo farm in Taveta Subcounty. Many farmers in the area have increased production ahead of the completion of the banana plant
Image: SOLOMON MUINGI

Banana farmers in Taita Taveta have urged the county government to fast track the completion of the Taveta banana processing plant to save them from making losses.

They said the construction of the multimillion plant is overdue despite the urgent need for a steady banana market in the region.

The Sh110 million European Union-funded plant is aimed at boosting the value addition chain of banana production and food security in the arid and semi-arid areas of the county.

The farmers have been counting losses for lack of a stable market.

“We expected the plant to be ready by January because that is what the government had earlier promised. Farmers are still selling their bananas at a throw-away price,” Isaac Mutua, a banana farmer in Kitobo said.

Farmers produce at least 125,000 tons of banana annually on the 2,080 acres under banana plantation.

Mutua, however, said most of the bananas produced either go to waste or do not benefit the farmers due to poor prices.

He decried lack of standard prices for the product thus giving leeway for middlemen to exploit farmers.

Cornel Meriati, a farmer in Lumi further urged the agriculture department to issue farmers with improved banana seedlings to boost productivity ahead of the completion of the processing plant.

He stressed the need to ensure sufficient bananas for the smooth running of the factory.

The Taveta area where bananas are highly grown has been the food basket of the Coast region.

Once completed, the industry will process 8 tons in a day and it is expected to grow the economy by Sh7 billion.

Farmers are targeting increased production to 246,000 annually to sustain the banana factory.

The County Assembly’s Agriculture, Fisheries and Livestock committee chairman Juma Mwamba revealed that the plant is 80 per cent complete and is expected to start functioning by September this year.

The Wusi/Kishamba MCA said collection centres for the bananas have been established in Mboghoni, Mata and Njukini wards and are to be completed before the Banana plant is ready.

Through the industry, he said the government targets to increase household income through value addition, linkage of farmers to reliable markets.

Once completed, the MCA said the plant will create 38,930 direct and indirect employment opportunities.

Governor Granton Samboja in February inked a deal with the Micro Enterprises Support Programme Trust in a bid to invest in banana value chain industrialization efforts.

The deal will see banana farmers benefit from a ready market for their produce through the banana processing plant in Taveta.

Samboja said the collaboration will further help in sustaining the multimillion plant.

“Smallholder banana farmers at the grassroots level will benefit from access to markets and value addition activities hence boost agricultural industrialization and innovations in the county,” he said.

Samboja said increased productivity will ensure the region attains the goal of food security and the creation of jobs.