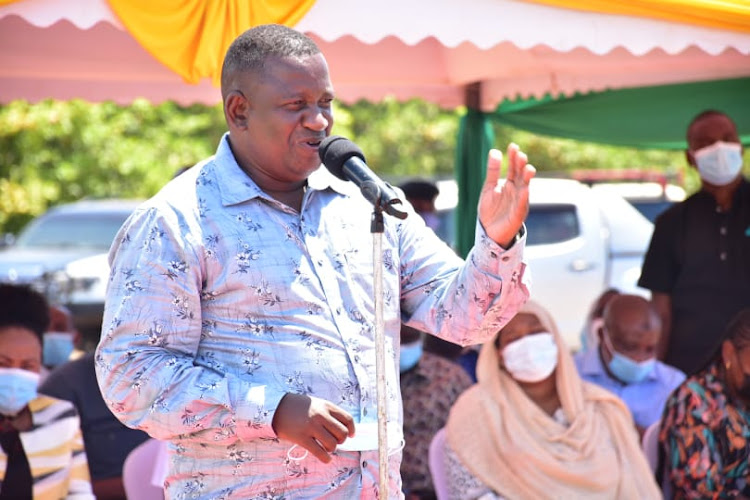 Kwale Governor Salim Mvurya has raised an alarm over defiance of the Covid-19 regulations by the political class in the region.

He said this outright defiance is contributing to the spread of the deadly virus.

According to the Governor, Kwale is still witnessing gatherings conducted  by politicians.

Recently, President Uhuru Kenyatta suspended all political gatherings for a 30-day period in a bid to contain the spread of Covid-19 in the country.

Kenya is experiencing a third wave of Coronavirus, which is very lethal.

“We have reports of individuals who organise meetings in private and in public to engage in early campaigns. They should be warned,” he said.

The governor said most of those attending these meetings are doing so without observing the Ministry of Health protocols on combating Covid-19; physical distancing, masking and hand washing.

Mvurya expressed concerns that constant violation of the public health rules by these politicians could exacerbate the already alarming rate of infections, if not controlled.

By Saturday, Kenya had reported 138,077 cases of Coronavirus after 1,184 new positive cases were confirmed. The number of fatalities stood at 2,206, after 20 more people succumbed to the disease.

Kwale county has reported over 55 cases of Covid-19.

The governor warned that Kwale might record more cases if the politicians continue to disobey the government’s directive.

“We will not allow you to endanger the lives of many citizens because of your selfish interest. Action must be taken against them,” he said.

On Saturday night, 87 people were arrested in various places within Kwale for flouting the Covid-19 rules.

From the arrested individuals, 53 had violated the curfew rules by attending a wedding at night, whereas 34 others had been arrested for not wearing face masks.

The County Chief said his government has considered reducing the number of staff to heighten the fight against the corona disease.

This is the second time the County government has directed half of its staff to work from home to reduce congestion and interaction in public places.

An exercise to clean and spray all public places is also ongoing.

“We have repeatedly been warning you on the maximum number of people to carry. When we come for you, you should not complain because the law must be followed,” he said.