Last October, they lost two of their colleagues who were on the frontline fighting the disease.

• The county has more than 4,500 health workers who include doctors, nurses, clinical officers, laboratory technicians, mortuary attendants and community volunteers.

• Over 45 Mombasa health workers had contracted the disease during that time. 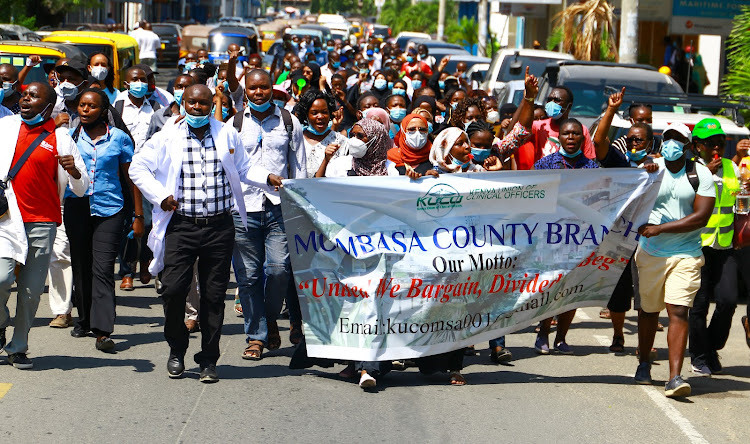 As Mombasa marks one year since the first case of Covid-19 was reported in the county, health workers remain among the hardest hit in the region.

However, apart from the three-month tussle with the county, the nurses’ union says there are lessons they took home from the fight against Covid-19.

Peter Maroko, branch secretary general of the Kenya National Union of Nurses, said when Covid-19 struck, they were really frightened.

“These were uncharted waters and we did not know how to deal with the disease, which was fast spreading,” Maroko said.

However, as days went by, the nurses adopted new ways of operating.

“We had to start doing a lot of research on the disease. At the end of the day, the nurses achieved by gathering valuable information and experience in dealing with this new disease,”  Maroko said.

The county has more than 4,500 health workers who include doctors, nurses, clinical officers, laboratory technicians, mortuary attendants and community volunteers. Of the number, 800 are nurses and 200 are doctors.

Maroko said they lost two of their colleagues in October last year, who were on the frontline fighting Covid-19. One of the nurses was working at Likoni Subcounty Hospital and the other one was working at Coast General Teaching and Referral Hospital.

During that period dozens of other nurses had been taken to isolation after contracting the disease. The county was facing a shortage of personal protective equipment.

In total, over 45 health workers contracted the infectious disease during that time. However, Maroko said they lost track of those who contracted the disease, but the number must have gone high.

“As nurses, we lost two of our colleagues,” he said.

Maroko said they also faced a major challenge when they engaged the county government in a three-month industrial action.

Even as they fought Covid-19, doctors and nurses in Mombasa experienced salary delays, lack of promotions and non-remittance of statutory deductions like NHIF, NSSF and KRA by the government.

During the signing of a return-to-work-formula at Governor Hassan Joho’s office, Maroko told the press it was not their wish to go on strike. He said they are essential workers and they should be treated with the dignity they deserve.

“We should be given priority and our issues resolved well.  It was not our wish to go on strike. We want to appeal to the Mombasa county government to always allow us to resolve our issues amicably,” Maroko said then.

On why the health workers have not come out to take the Covid-19 vaccine, Maroko said, they have not been sensitized enough on the Oxford AstraZeneca vaccine.

“Personally, I have not gone to take the vaccine because we have seen numerous reports of countries which stopped using the vaccine, something which raises a lot of questions and creates fear amongst the health workers,” he said.

Mombasa County received 9,000 doses of the AstraZeneca Vaccine on March 9. However, by last week, only 800 of the targeted 4,500 health workers in Mombasa had come out to get the vaccine.

Joho, who on Tuesday last week took the jab, warned that they might be forced to administer the vaccines to other willing citizens after frontline personnel in the region refused to show up.

He said the AstraZeneca vaccine has an expiry date. They cannot continue storing the doses past the shelf life. However, Maroko said they cannot be coerced to take the vaccine without proper sensitisation.