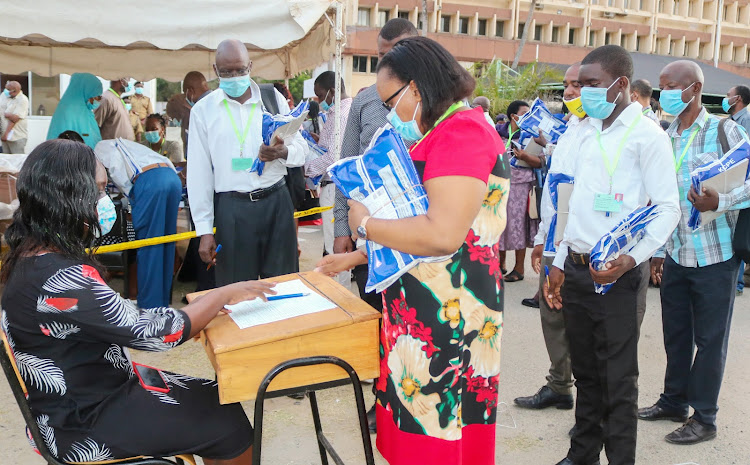 The 2020 Kenya Certificate of Primary Education examination at the Coast began on Monday morning without any major hiccup.

“The examinations in all the six counties of the Coast started on time. We have no challenges reported in the region, it was all smooth,” said Bwana.

In Lamu’s Boni Forest, the pupils from the minority Boni community sat the KCPE examination for the first time after a seven-year break.

The schools within Boni Forest were closed down in 2014 owing to frequent attacks from the al Shabaab militants. Some schools were torched and vandalised by the Somali-based militants.

The government reopened the schools in January this year.

Teachers and learners were airlifted by police and military choppers to their various learning centres.

The KCPE candidates are sitting their examinations under tight security.

Lamu education director Joshua Kaaga said arrangements were made to have all candidates from the terror-prone areas sit their examinations at Mokowe Aride Zone Learning Centre in Lamu West.

The centre was established in 1992 as a rescue centre for minority communities in the region like the Boni, Sanye and Orma.

Lamu county commissioner Irungu Macharia said they have ensured adequate security and that schools on the Lamu-Somalia border have also been tightly secured.

“We had put in place elaborate plans to ensure exams, invigilators and candidates in such areas are secured and exams arrive on time,” he said.

“Most of the security personnel have been concentrated in these schools in Kiunga, Mkokoni and Ishakani because they are on the border with Somalia,” he said.

Some 3,348 candidates are sitting for their KCPE in Lamu this year.

He then went round to monitor the administration of the papers in the various schools.

In Kwale county, which has 22,465 candidates, the examination containers were opened at 6am as directed by the Ministry of Education.

Schools from far regions of Kwale were given priority. No exam centre managers were allowed to leave without a police escort.

Kanyiri said security was beefed up to ensure maximum safety during the examination period and protect exams from leaking.

"The examinations have commenced smoothly in the entire region, but in case of challenges, we have back-up strategies to respond,” said Kanyiri.

He warned against exam cheating, saying stern action will be taken on the perpetrators.

In Taita Taveta county, some 8,771 class eight pupils started their KCPE examinations without any challenges.

Addressing the press while opening the examination container in Voi, deputy county commissioner Daniel Nduti said all systems were set for smooth administering of the exam.

He said enough security officers had been deployed in all exam centres to oversee the three-day exercise.

“We are using a multi-agency approach to secure the process and ensure that there are no irregularities,” he said.

He further warned centre managers, supervisors and invigilators against violating the examination guidelines, noting that disciplinary actions shall be taken to those found capable.

Most parts of the remote areas of the county are marred by transport challenges due to hilly terrain. Nduti, however, said special vehicles were allocated in areas experiencing terrain challenges.

“As you deliver on this national duty kindly take care of yourself because the third wave of Covid-19 seems lethal,” he said.