The water is treated through reverse osmosis, making it safe for consumption.

•The current membranes can last up to three months if well utilised, but if overused could last only for a week or two.

•The project will transform the lives of the local community in Ngomeni.

More than 10,000 residents of Ngomeni area in Magarini Constituency in Kilifi County have benefitted from a plant that is purifying salty water from a well. https://bit.ly/3cZyuhP

More than 10,000 residents of Ngomeni area in Magarini Constituency in Kilifi County have benefitted from a plant that is purifying salty water from a well.

The project is funded by Helping Hand for Relief and Development, a non- governmental organisation.

Residents could not hide their joy during the official the opening, attended by top officials of the NGO led by Musa Ibrahim, the regional director, and board member Prof Mohamed Karama.

Prof Karama said the water is treated through reverse osmosis, making it safe for consumption.

He said the only maintenance cost would be the membranes, which will be replaced every two months.

Prof Karama advised the community to utilise the water effectively for drinking and cooking only. He said using it for washing, bathing, irrigation will be wasteful.

"This water is good for drinking but there has to be an an alternative source of water for washing clothes and other households’ chores to prevent the plant from overworking, which would reduce the life of the membranes," he said.

He said the current membranes can last up to three months if well utilised, but if overused could last only for a week or two.

Ibrahim said they came in the area a few months ago and found out that locals were drinking salty water from a well. After consultation with the area leaders, the current project was mooted.

The regional director said they were sponsored by donors from the USA.

"I would urge the community to ensure the sustainability of the the project. Today we are leaving the project to the community and would like if we come back after two months or three years to find it going on, the project is good and should go on if well utilized it can last up to five years," he said. 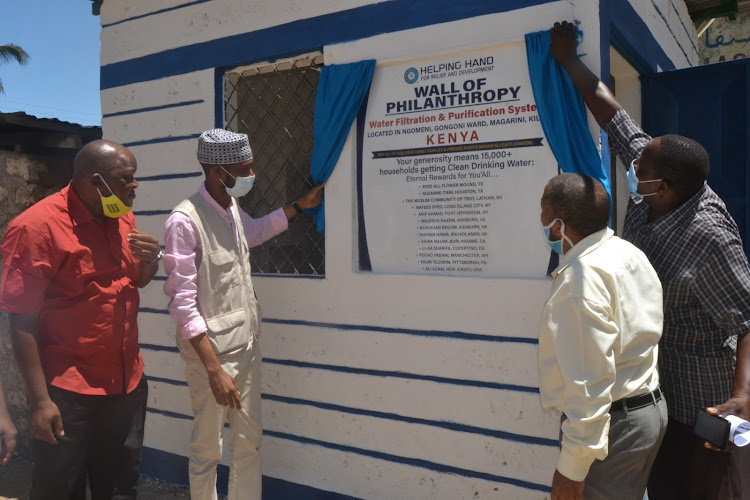 Richard Lwambi, the sub-county administrator, Magarini, with Musa Ibrahim, the regional director of the NGO and Prof Mohamed Karama, a board member, officially launch the water project at Ngomeni.
Image: ALPHONCE GARI

Present during the launch included Gongoni ward  MCA Albert Kiraga, and Richard Lwambi, who is the sub-county administrator of Magarini.

Ustadh Kasim Mbwana, a resident, said they were happy because since independence they have been drinking salty water.

“We thank the donors for coming up with this project, a history has been made today because Ngomeni residents for many years have been suffering to get fresh water, this organisation has brought blessing,’’ he said.

The MCA thanked donors for funding the project.

He said the community needs to sustain the project so that it can last.

“As a county government, we always pray to get donors funds and partners because the budget of the county is not enough, and there are challenges of water accessibility," he said.

Kiraga said the county spends a lot of money on electricity to supply water in Magarini and urged authorities to embrace solar energy.

Lwambi said the project will transform the lives of the local community in Ngomeni.