Orengo dismisses reports that handshake is on shaky ground

Says it should not be mixed with the 2022 politics. 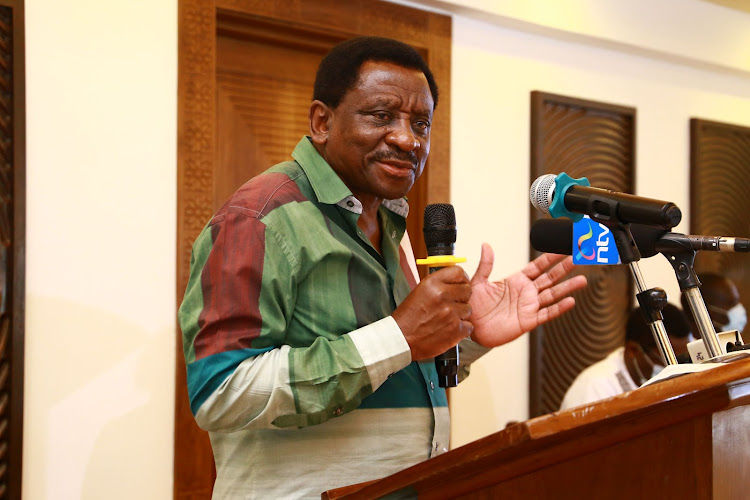 Siaya Senator James Orengo has dismissed reports that the handshake is on shaky ground.

The Senate Minority leader said the handshake is as firm and steady as it ever has been.

“The handshake is very strong. I want to assure you. It is extremely strong,” Orengo said.

He spoke during the Senate leadership retreat at White Sands Hotel in Mombasa on Tuesday.

He said there has not been any crisis meeting at State House over the handshake.

“It is a meeting which had been planned in the last meeting when the leaders of political parties met and decided to expand the people who are attending the meeting to include Governor Hassan Joho and Wycliffe Oparanya,”  Orengo said.

Speaker of the Senate Kenneth Lusaka said the handshake has enabled Parliament to work in harmony and called for this harmony to continue in order to deliver the first amendment to the constitution in peace.

“We still have a long way to go with a short period of less than 18 months. We should remain united,” Lusaka said.

Orengo and Rarieda MP Otiende Amolo have raised concerns that some civil servants are being used to undermine their party leader Raila.

This followed moves by state operatives to secretly move the BBI secretariat operations to the Office of the President.

This effectively handed Interior PS Karanja Kibicho sweeping roles over the BBI process, which had been co-chaired in the secretariat by Jubilee’s Denis Waweru and ODM’s Junet Mohammed.

On Tuesday, Orengo said the handshake should not be mixed with the 2022 politics.

“The moment we get into a discussion of handshake plus 2022, then my speaker here would have a very difficult position to manage us in the house when trying to implement the handshake in the bill and in terms of the consequential legislation which is going to come before the National Assembly and the Senate,” Orengo said.

He reiterated that civil servants should be subject to elected political leaders.

Orengo said the head of the executive and their deputy at the national level are elected people and so are the heads of county governments.

He said the Speakers of the various houses preside over elected persons.

“The constitution says our system of democracy is either exercised by the people directly or through their elected representatives,” Orengo said.

“They already are in the handshake, otherwise they would not be in State House today,” Orengo said.