MPs to budget for referendum after IEBC issues dates

In October last year, IEBC said they will need at least Sh14 billion to conduct the referendum.

• A referendum to amend the 2010 constitution is expected around June this year.

• Already, 11 county assemblies out of 47 have adopted and passed the Constitutional (Amendment) Bill 2020. 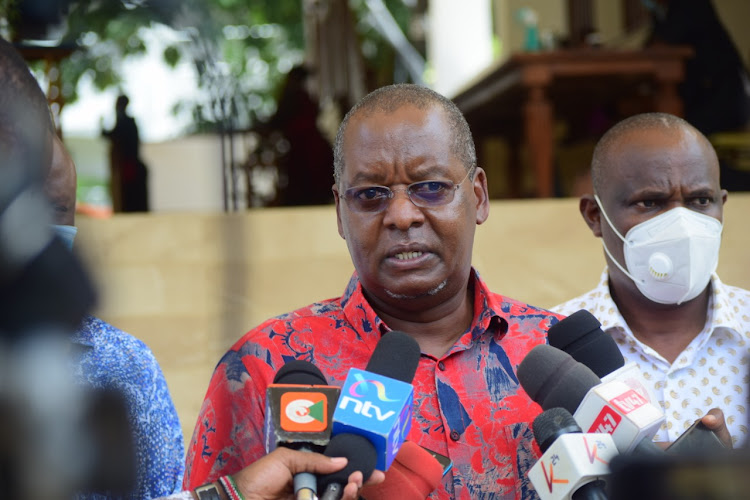 The National Assembly leadership is waiting for the IEBC to pronounce itself on the much-awaited referendum, before budgeting is done.

National Assembly Majority leader Amos Kimunya has said they will only budget for the referendum after the actual dates are issued by the Independent Electoral and Boundaries Commission.

Speaking in Mombasa during a two-day pre-budget review conference, Kimunya said they still have time to plan.

“On the issue of the expected referendum, first of all, we need to know the dates. If the date is June, then it will be funded within this year,” Kimunya said on Monday.

He said the costing will come in two ways — either upfront or after the dates are set.

“There are options on that (cost) and we still have time. Right now, it is too early, IEBC needs to first pronounce itself and some of the issues that are before court need to be cleared,” Kimunya said.

The  Kipipiri MP said they are hopeful that a referendum will happen within this year.

“We all know there will be a referendum.  The issue of how much it is going to cost is just a small detail that will be part of the budget making process,” he said.

A referendum to amend the 2010 Constitution is expected around June this year.

At least 24 county assemblies must pass the Bill, before it is taken to the National Assembly.

In October last year, the electoral commission said it would need at least Sh14 billion to conduct the referendum.

However, a section of politicians who have been opposing the constitutional amendment say the changes will increase the wage bill just to create positions for a few individuals.

On the issue of the Big Four Agenda, Kimunya said, the 2021-22 budget must be aligned to capture all the flagship projects of President Uhuru Kenyatta before the 2022 elections.

“Contrary to what you hear some people saying that the Big Four agenda has been suspended in favour of BBI, the whole of this year’s budget is about the Big Four,” he said.

“We have had deliberations with the ministries of Industry, Health, Agriculture and Housing.  At the end of it, we will come with a proper Budget Policy Statement, which will be tabled before the House in a couple of weeks,” said Kega.

The Kieni legislator said the assertions that the Kenyan public debt is rising exponentially are not true.

“Yes, the public debt is rising, but not exponentially.  As you improve and raise your GDP, definitely the costs go up,” he said.