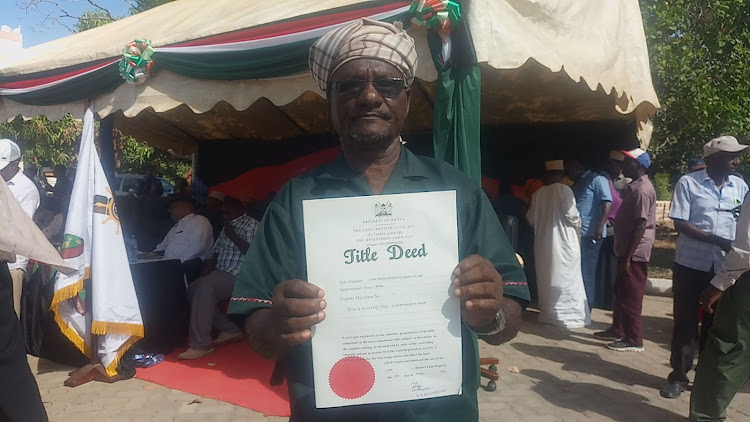 Land ownership remains a key challenge for most Lamu residents 57 years after Independence.

Now they hope the Building Bridges Initiative spearheaded by President Uhuru Kenyatta and his handshake partner ODM leader Raila Odinga will resolve the issue once and for all.

“There is definitely something any leader can do if they want to but maybe because it benefits them in a way, they just don’t,” he said.

He said they are confident the Building Bridges Initiative will factor in the issue and provide laws that will protect private, public and community land.

“Devolution was our hope, but things didn’t really work out. As elders, we are keenly following up on this BBI to see if it will help. If it doesn’t, we are doomed,” he said.

Despite residents possessing land in various parts of the region, the majority still lack title deeds to identify them as the rightful owners.

More than 60 per cent of land in Lamu county is classified as public while 70 per cent of the population do not own title deeds.

The land has never been demarcated or surveyed since Independence.

The result has been a chaotic mix of rampant land grabbing and a sharp increase in land squabbles, landlessness and a bloated population of squatters over the years.

Efforts by residents and their leaders to get the national government and the National Land Commission to resolve the issues haven’t yielded much.

With mega projects like the Sh2.5 trillion Lapsset, land in the region has a become a hot cake everyone wants to own at all costs.

Speaking in a past interview when the NLC team visited Lamu, commissioner for historical injustices Samuel Tororei acknowledged that many of the land conflicts in Lamu stem from injustices committed since the colonial period.

Tororei said the move by the then colonial government to list land in Lamu as government land had caused a lot of suffering, precipitating the current conflicts.

According to the commissioner, many of the land injustices Lamu faces date back to as far as 1908 when every single piece of land in the region was listed as state land.

He said successive regimes have played a part in the massive land irregularities, including irregular and unfair allocation whose effects can still be felt today.

“In 1908, the colonial government passed a decree that gave Africans about six months to lay claim to their land and since many Africans had no clue about gazette notices, many were unable to stake their claims. This way, Lamu was rounded up and declared government land,” he said.

The commissioner explained that back then, the assumption was that all people in Lamu were squatters as they hadn’t laid claim on any land.

“These people were not squatters. The only problem is that they just didn’t know how to go about the whole issue of claiming their land. It’s understandable that they feel a great injustice was done to them because it did happen,” Tororei said.

He said past regimes such as the district development committees and the defunct county councils had full authority over land, which resulted in land grabbing and unfair allocations.

“This way, lots of land in Lamu ended up in the hands of a few who turned them into ranches. Such tycoons would grab up to 100,000 acres, after all land approvals were issued single-handedly by the Commissioner of Lands or those in power,” he said.

The NLC has, however, insisted that the commission will do all in its power to ensure Lamu residents acquire title deeds and allocate land to squatters.

Minority communities like the Boni and Sanye have found themselves bearing the brunt of the land mess.

Bonis are traditionally hunters and gatherers while the Sanye are nomadic pastoralists.

These two communities have felt powerless and unable to protect their ancestral land due to the unavailability of solid land rights.

In 2019, the two communities joined forces in a bid to fight for their land.

Together they are pushing to have the county and national governments diversify land regulations in the region so that they can obtain title deeds, which will in turn enable them to keep grabbers at bay.

The Sanye and Boni communities have occupied their lands for decades but they want the land allocated to individuals.