Politics of deceit that define the Coast region

Kilifi North MP Owen Baya, says Joho and Kingi should resign so they can seek new unity with clean hands

•Ganze MP Teddy Mwambire who is also ODM’s Kilifi county deputy chairman said ODM is intact and the two governors’ sentiments might have been misconstrued.

•There were two by-elections in Kilifi county and Joho never campaigned for the ODM candidates in those by-elections. Kingi swiftly swung to action and delivered victory in both Ganda and Dabaso ward by-election. 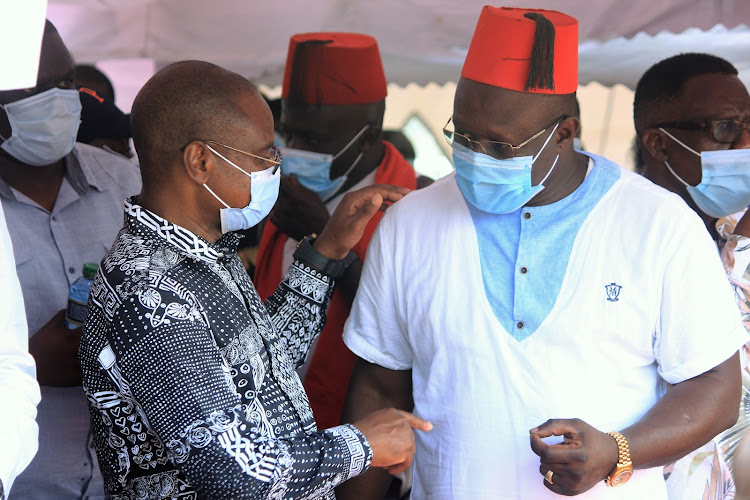 Mombasa Governor and ODM deputy leader Hassan Joho has appeared to change tune on the formation of a party that would lead the region into national politics.

The sudden change of heart when he toured Garsen in Tana River county has exposed Joho’s soft underbelly, though his handlers have dismissed the reports as rumours.

Kilifi North MP Owen Baya who was the first to take Joho on after the turn of events described Joho as a master of deceit and a leader who cannot be trusted.

“Joho said ODM is the saviour of Coast politics and chastised those of us who believe the region requires a Coast-based national party to champion the Coast agenda at the national table and he is only looking for political relevance after he learnt that we have evacuated ODM in the region,” Baya said.

He said Joho and Kingi should resign their party positions in ODM so they can seek new unity with clean hands.

“Last week we saw leaders abusing each other to show their political masters that they have following. If you are sincere enough abuse each other to please people from the coast,” Kingi said.

Fikirini Jacobs, a youth leader from Kilifi, said Kingi’s sentiments are a clear indication that the Coast awakening is louder, closer and faster.

He, however, admitted that there is a missing link in the whole debate about Coast unity.

“Joho and Kingi's friendship is a bit shaken. This has made the two avoid each other in many instances. The proponents of Coast unity are glorified more than the course. I think this is a big takeoff error,” Fikirini said.

He further said the attempt to harmoniSe the already existing Coast-based political parties is underrated.

“This means the new party thought to unify our region may have the members of the already existing parties thus suffocate the unity pursuit. The crusaders of Coast unity have declared war or even drawn boundaries for other Coast leaders. That means we shall have fractioned unity and we are not any different,” Fikirini said.

According to Fikirini, the electorate has been left out of the process hence they are seen as spectators rather than players.

“Any revolutionary changes should always apply a bottom-top approach. The missing link in this doesn't consider the people,” he said.

Ganze MP Teddy Mwambire who is also ODM’s Kilifi county deputy chairman said ODM is intact and the two governors’ sentiments might have been misconstrued.

“The truth is that we're working around the clock to craft the best way forward for the ODM party's strength at the Coast region,” Mwambire said.

As the political comradeship between Joho and Kingi is first fading, the region is more confused than before.

In 2017, during the inauguration of Kingi, the two leaders promised to retreat and chart the way forward on who among the two will take the political kingship of the region.

The two leaders, however, never made it public if at all they held the meeting.

There were two by-elections in Kilifi county and Joho never campaigned for the ODM candidates in those by-elections. Kingi swiftly swung to action and delivered victory in both Ganda and Dabaso ward by-election.

He challenged both Kingi and Joho to relinquish their positions in ODM if they are sincere they want to form a new party for the region.