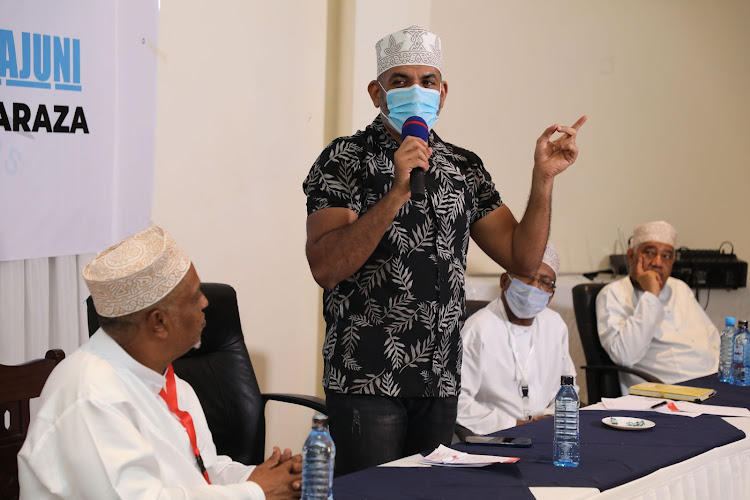 The Bajuni community who mostly live in Lamu county has formed a council of elders that will make key political, financial and social decisions for the minority group.

The council is made up of prominent figures from the community among them former and current elected leaders. It will fight for key resources and positions which it says should have been given to the community decades ago.

It is expected to make key political decisions especially in Mombasa and Lamu counties, where members of the community hold or are seeking political positions.

These include Mvita MP Abdulswamad Nassir who has set his eyes on the governor position in 2022.

Abdulswamad is the currently among senior politicians from the community.

It is believed the council will back his bid to succeed Governor Hassan Joho in Mombasa.

He said the Bajunis should look to the future and mould it in the best way possible from now.

“Let us not see only the bad in us. Let us also see the good in us. We have a duty to identify ourselves and value ourselves,” the MP said.

He said this is after a speaker during the launch of the council at Royal Court Hotel on Thursday said the Bajunis are among the poorest, most uneducated and drug-ravaged communities in the country.

Nassir said in captain Ruweida Obo, who is the Lamu Woman Representative, they have the most experienced pilot in Kenya.

“We have many who have held our flag high,” he said.

Ambassador Ali Abbas, who was appointed chair of the council, said they aim to ensure the Bajuni community across the country makes major strides in education, health, economy and culture.

A major priority for the council is to lift the level of education of the community.

They say the community lags behind in terms of education and only a few of them have the required high levels of education.

“Most of our people’s level of education is low and we have to build their capacity so that this changes,” Abbas said.

He said the Bajunis who have high levels education did not school in Lamu.

Abbas said the economic situation of the community members in Lamu is poor.

Their main economic activity is fishing.

The Bajunis are found in Lamu, Mombasa, Kilifi, Nairobi and a few other counties in Kenya and in countries like the DRC.

According to records, the Bajuni population in Kenya is around 100,000 but prominent Bajunis including former Lamu Woman Representative Shakilla Abdalla believe they are more than 500,000.

“We, the Bajunis, were scattered after the Shifta wars where 18 of our villages in Lamu were destroyed. Our community members fled to different parts of the country and the world,” Abdalla said.

Most of the community members say they have been left out of key positions in government and development in their county.

“We want to ensure the Bajunis, like any other communities, have their voice and are recognised,” said Abbas, who has served as Kenyan ambassador to Kuwait and Iran.

Timamy said 70 per cent of the LAPSSET project is in Lamu yet there is no one from the county who sits on the project’s board.

“These are the issues we should be fighting for. We should demand a place on the board,” the former governor said.

Obo said the council should fight hard to ensure the community commands respect.