The bridge will decongest the Likoni ferry crossing channel that handles about 300,000 people daily.

• The Sh1.7 billion bridge, expected to be opened to the public in mid-December, will be 800 metres long and will have a six-metre wide walkway.

• The bridge will have a 150-metre long movable part, right at the middle, which will be open and close to allow for ships to pass through to and from the Mombasa port. 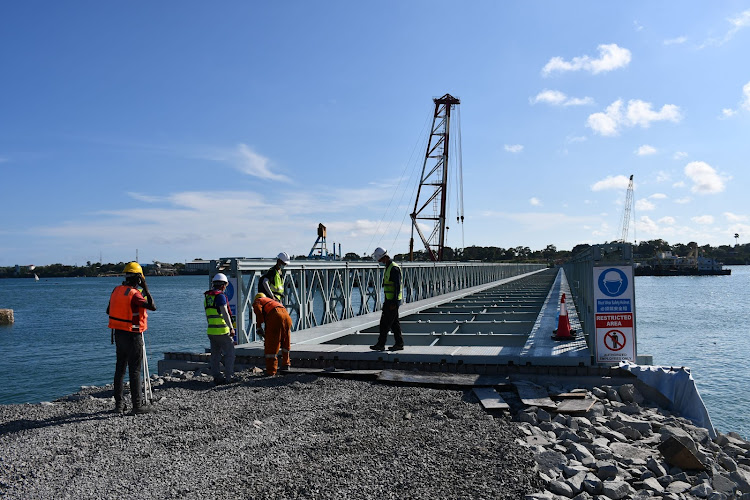 The more than 300,000 Likoni ferry users cannot wait for the Likoni floating bridge to be completed.

The Sh1.7 billion bridge, expected to be opened to the public in mid-month, will be 800 metres long and will have a six-metre wide walk way.

The bridge will have a 150-metre long movable part, right at the middle, which will be opened and closed to allow for ships to pass through to and from the Mombasa port.

The movable part will be connected to motors on both sides of the section to allow the bridge to open and close.

The northern trestle, which is the part between the start of the bridge on the Island side where the movable part will start, will be 248m long. The southern trestle will be 188m long.

The road approaching the start of the bridge on the Island side, known as the North approach road, will be 162m long while the South approach road on the mainland side will be 175m long.

Kenya National Highways Authority engineer Erick Wambua said piling, which forms the foundation of the bridge, is made of special concrete that is strong enough to withstand the weight of the bridge.

It is reinforced by steel structures which will also support the actual floating bridge.

Pontoons will be placed on either side of the movable section to reinforce the support structure of the bridge. 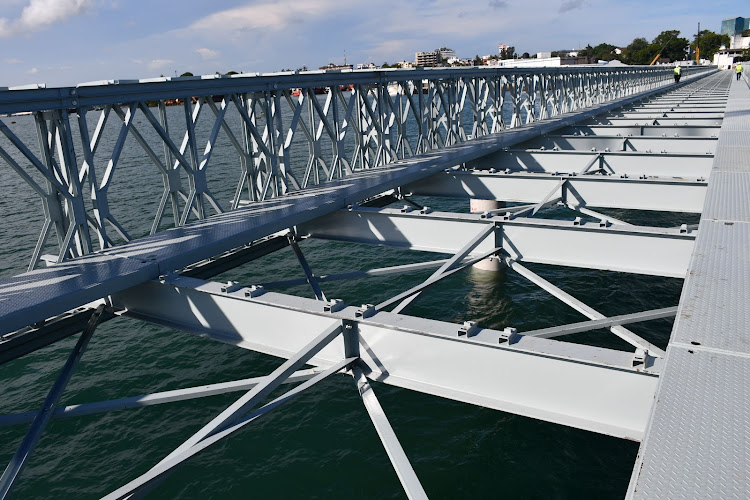 “The floating bridge will be safe even during harsh ocean conditions,” Wambua said.

The bridge will decongest the Likoni ferry crossing channel that handles about 300,000 people and 6,000 vehicles daily.

The government also has plans to construct bus termini on both ends of the bridge to allow for easy movement.

The bridge will do away with ferry scheduling that inconveniences those who use the ferries to and from work every morning and evening.

“You will come at your own time and cross at any time you want. There will be no setting of time to pass like at the Likoni crossing channel where at a certain time the ferries are not available,” President Uhuru Kenyatta said when he visited the project.

Users will only wait when a vessel is passing.

Mwachipulo said it does not make sense to walk from Mtongwe to Mwingi Babu Road and then to Peleleza to get to the footbridge. It is too far, he said.

"The footbridge you are talking about does not help Mtongwe residents at all. We would rather board a matatu to Likoni," Mwachipulo said.

Mwachipulo said they would rather have a bridge constructed from Meza Creek to Peleleza.

"If that does not happen, Mtongwe residents will stay for 10 years without using that footbridge," Mwachipulo said.

He spoke on Friday during a public participation forum for the construction of the Mtongwe ferry ramp at Mtongwe.

Coast regional coordinator John Elungata said the footbridge will open up parts of Likoni constituency which have been deserted since the Mtongwe ferry services were stopped following the 1994 disaster.

"The footbridge will save people time and effort," he said.

The floating bridge will have a special committee that will be in charge of its management.

The committee is composed of representatives from the Kenya Ports Authority, Kenya Ferry Services, the local community, the Likoni and Mvita MPs' offices, the National Government Administration Office and Beach Management Units, among others.

There will be no cyclists, motorcyclists or tuk-tuks allowed. Only pedestrians will be allowed to use the bridge.

However, this is subject to confirmation by the management committee, which will meet next week to discuss the launch and usage of the bridge. There will be no charges for using the bridge.

“At first it was suggested that nothing motor-like will be allowed to pass through the bridge. Cyclists and pedestrians only. But this keeps changing,” a member of the committee said.

“There are different suggestions being floated. These suggestions are then discussed before a final decision is made,” the committee member, who sought anonymity, told the Star.

The National Police Service will present a suicide assessment report before the committee detailing the number of suicide cases that occur at the Likoni crossing channel, the frequency at which they occur, the underlying causes, among other issues.

“This report will inform the actions or measures that will be taken to prevent such from happening at the floating bridge,” the source said.

The bridge will have divers on standby on a 24-hour basis to rescue anyone who may fall into the water.

“The bridge is a highly mechanised one. Two tugboats will be there to push open or close the movable section of the bridge in case the machines fail and the movable parts fail to open,” the committee member said.

Constructed by the China Road and Bridge Corporation in conjunction with Kenha, the floating bridge is one of its kind in Africa. Engineers say this is the second of its kind in the world. The first is in China.

“The bridge will be used for about five years, by which time the Mombasa Gateway Bridge is expected to be ready for use,” said the committee member.