Also want to inspect several vehicles, a pistol and an iPhone that were confiscated during 2014 raid

• Wife of Baktash says children's toys were confiscated despite not being part of the investigation, adding that it was meant to harass the innocent.

• They want one hand gold chain with coins, seven gold chains and seven gold earring sets, saying the properties are not to be forfeited as proceeds of crime. 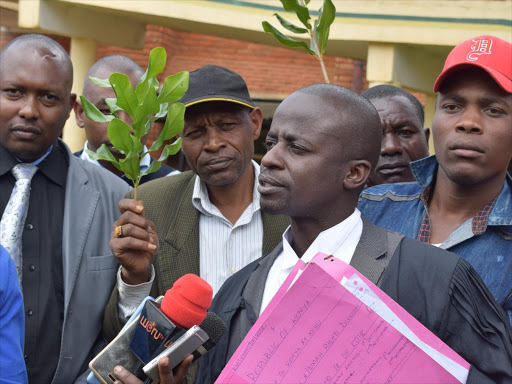 The Akasha family have sued the state demanding the release of items confiscated by authorities during a raid that led to the arrest of their brothers.

The Mombasa High Court has already certified the case as urgent.

They are also seeking orders to be allowed to inspect the property.

Najma is the wife of Baktash Akasha Abdalla while Fatma is Baktash and Ibrahim's mother.

Baktash, a father of seven, is serving a 25-year sentence imposed by the United States Southern District Court of New York while Ibrahim was sentenced to 23 years.

The duo was sought for extradition to the United States and was tried for conspiracy to import narcotics.

The case will proceed before Justice Eric Ogolla on September 30 for directions.

The family wants the government to surrender one hand gold chain with coins, seven gold chains and seven gold earring sets, saying the properties are not to be forfeited as proceeds of crime since the two are already serving sentences.

They want to inspect several vehicles, a pistol and an iPhone, and further want the same as captured by an inventory dated November 9, 2014, returned to them.

Through lawyer Kiogora Mugambi, they say demands for the release of the items have been declined on the basis that the same are liable for forfeiture.

“This is despite the petitioners not being party to the 2014 extradition case. The respondents violated the rights and freedoms of the petitioners,” Mugambi said.

The lawyer said the actions and conduct of the respondents are illegal, irrational, unreasonable, arbitrary, oppressive and procedurally unfair.

The properties were seized after a raid conducted at their Nyali home in 2014.

“Last year on September 17, the DPP withdrew a review application before the High Court and the presiding judge directed that I move to the lower court for release of my items,” Najma said.

She said police officers accompanied by Drug Enforcement Agency officers ransacked the entire premises from the kitchens, sitting room and the bedrooms.

“Before the search, the group upon demand failed to produce either a search warrant or any other authority granting them access to the premises,” she said.

They were all rounded up and forced to lie on the cold floor beside the pool, she said, adding that it was a violation of privacy.

She said the raid was an unjustified abrogation of the freedom of conscience as practised by Muslims.

The passports, IDs and several chequebooks were later returned.

Najma notes that the seizure of her children’s birth certificates, passports and toys had no connection to any offences being investigated and that they were seized to harass innocent people.

The duo is seeking a declaration that the actions by the various government agencies have resulted in the violation and infringement of their rights.

They also want an order for damages for loss of use, and prejudice occasioned by the seizure and holding of the items.