Sh5 billion will be used to upgrade fisheries and repossess grabbed landing sites.

• The CS said they will be training 2,000 fishermen annually in new fishing methods. 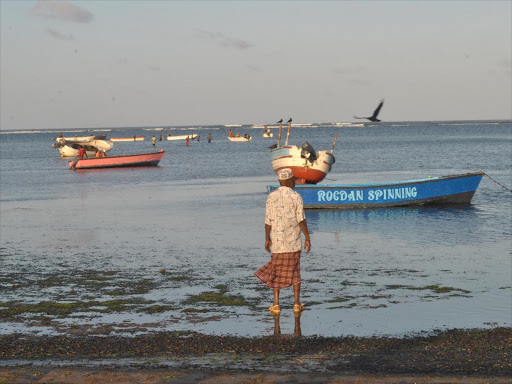 A fisherman at the shores of the Indian Ocean in Malindi
Image: ALPHONCE GARI

The government has set aside Sh12 billion for blue economy projects, Agriculture and Fisheries CS Peter Munya said on Monday.

Munya said the funds will be used to reclaim grabbed landing sites and upgrade those in bad condition.

The Cabinet Secretary, who is on a three-day tour of the Coast region, spoke in Malindi after inspecting blue economy projects being implemented by Kilifi county and national governments. He was also expected to tour Mombasa and Kwale counties.

Munya said they have repossessed many landing sites but there are still others like the one in Mayungu that is to be repossessed even though it is being claimed by a private developer.

He said Sh5 billion will be spent on upgrading fishery facilities and repossess the landing sites. Currently, the government is collecting data on all grabbed landing sites and those that need to be upgraded.

The CS said the Indian Ocean is vast, with over 41 per cent of Kenya's maritime area being an exclusive economic zone that can generate huge revenue to the government if well exploited.

"The government is in the process of reclaiming all landing sites that had been grabbed from the public and made private," he said.

Munya told county commissioner Josephat Mutisya to work closely with the county government and beach management units (BMUs) to repossess landing sites. He said those already repossessed are being upgraded to modern standards.

Munya said they will be training 2,000 fishermen annually in new fishing methods. He was accompanied by Kilifi Fisheries and Agriculture executive Lucianna Sanzua, commissioner Mutisya and BMU members as he inspected Malindi fisheries where the county is setting up a boat-making yard, while the national government is building a mega cold storage facility.

The CS said they will also construct a jetty in the area so fish catches are easily transported to the storage facility. "Our two days' tour of Coast is mainly focussing on fisheries because it is the economic pillar of the region but has many challenges."

Munya said the government is keen on the development of infrastructure and empowering the fishermen to enable them to adopt modern fishing.

Sanzua, for her part, said a master plan is in place for blue economy projects and fisheries to address issues of cold storage, value addition and marketing. She said the plan was launched recently for the marine sector to support mega-developments.

Sanzua said the fisheries sector has been marginalised for years and with the developments going on, it is set for transformation. She said they have been supporting the fishermen who used to be artisanal by giving them facilities though they still require more.

"Kilifi county also unveiled a boat making yard but it will need to be connected to the ocean by making a slipway," she said, adding that Ngomeni Road needs to be upgraded as it is a key harbour for fishing.

Mutisya said fishing is significant to the growth of the economy and promised to continue working with the county to improve the sector. He said they will map the ocean routes through the maritime authority.

The complaints about nets being destroyed by ships carrying ballasts shall be addressed and compensation paid where necessary, he said.