End of the Kajembe political dynasty?

Mwidani, who is vocal, courageous and controversial, is now seen as the heir apparent.

• The late MPs favourite to succeed him was Seif Kajembe, his son with his first wife, Aziza; he was already grooming him. 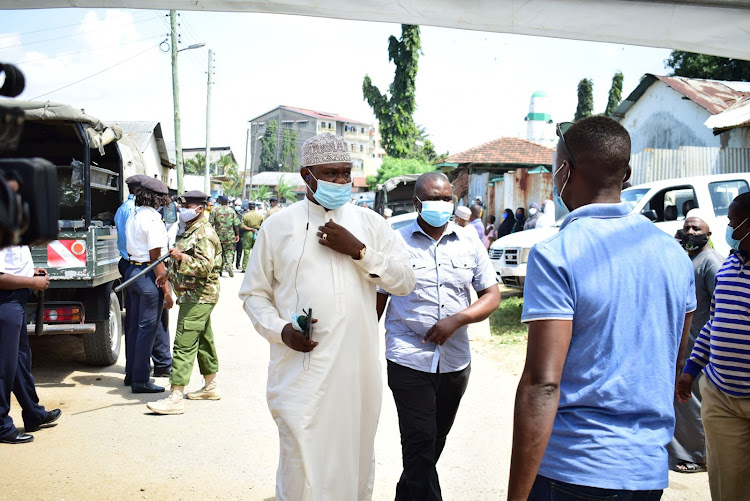 ‘Enthusiasm’ was his favourite English word and he embodied it in his political life that spanned more than four decades, three of which were as an elected leader.

In almost every political or social gathering, he used the word, pronouncing it with pride and confidence symbolic of his political life.

Ramadhan Seif Kajembe, the fallen veteran Mombasa politician, was a household name in politics in Mombasa and beyond.

Suleiman Shahbal summed it up when he eulogised him as a man of the people.

“Yet he remained a man of the people and always had time, a smile and a joke for everyone he met,” Shahbal said.

Now he is no more and a question emerges, is it the end of an era for the Kajembe political dynasty?

The late MP’s favourite to succeed him was Seif Kajembe, his son with the first wife, Aziza.

He was already grooming him, making him accompany him to political meetings and introducing him to various political players.

Seif vied for the Jomvu MP seat on 2013 against his half-brother, Mwidani Kajembe, and brother-in-law Badi Twalib, the incumbent.

But as fate would have it, Seif died on November 14, 2017, and with him, part of Kajembe’s soul. Seif was his preferred heir.

However, Mwidani, who is vocal, courageous and controversial, is now seen as the heir apparent.

He and Seif were the only two of Kajembe’s sons who were interested in politics.

With Kajembe and Seif now gone, he remains the only Kajembe name in politics.

The other sons, including Soud Kajembe, are in business.

Jomvu MP Twalib, who married Thurea Kajembe, daughter of Kajembe’s second wife Zaharia, is also seen as part of the Kajembe dynasty, something that many people do not agree on because Twalib does not use the Kajembe name.

Joshua Kativo, a political activist and close ally of Twalib said,“Twalib is serving his second term in Parliament after winning against Kajembe’s opposition both in 2013 and 2017.

“This means Twalib is his own man and not part of the dynasty,” he said.

Twalib has built himself through the people of Jomvu, having also served as councillor between 2007 and 2013.

When contacted, Twalib said he preferred mourning the death of his father-in-law in peace.

“It is not time to talk about that,” he said.

Mwidani, who had been activating his political machine, also said he would like to have his privacy during this time.

Mwidani is Kajembe’s son with his second wife, Zaharia, who died in March. He once stood up against his father during the 2017 vote counting when he was allied to Twalib.

Ruto eulogized Kajembe as a charismatic, progressive and diligent leader.
News
1 month ago

Two aspirants for the Mombasa senate seat at the weekend traded accusations as the race for the slot intensifies. Without mentioning his name, ...
Counties
8 years ago
STAR COMMUNITY POLICY AND PARTICIPATION GUIDELINES
by BRIAN OTIENO AND CHARLES MGHENYI
Coast
11 August 2020 - 06:15