The administration aims to sink over 100 boreholes across the county

• Projects by the devolved government through its strategic plan, aims to sink over 100 boreholes across the County in an effort to mitigate the pain of water shortages. 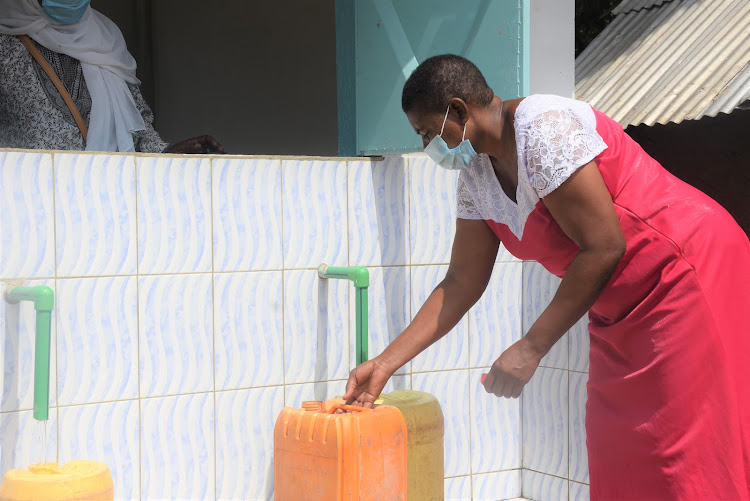 Water is life A resident of Ndonya village in Mtepeni, Kilifi South fetching water from a borehole sunk by the department of water, environment and natural resources in the county.
Image: Elias Yaa

The Kilifi county government has shifted to underground water exploration to boost water supply in the county.

Kilifi depends on water supply from the Mzima Springs and Baricho Waterworks. The supply has been inconsistent because of frequent power cuts due to non-payment of bills at the Baricho water station.

The administration aims to sink over 100 boreholes across the county in an effort to mitigate water shortages.

Mwachitu said the department is keen on tapping the availability of groundwater to address the problem. He visited Ndonya and Mwatundo villages in Mtepeni ward where he launched Sh8 million boreholes.

He said that while Covid-19 is ravaging the world, the county had taken enough measures to make sure there is water, which is an important tool against the spread of the virus.

“In Kilifi, we have areas of Ganze, Kaloleni and Magarini, which have experienced water challenges. The county has decided to use three alternative ways of addressing this problem. The first way is by expanding our piped water to the communities,” he said.

"For those for whom it will take time to connect, the first thing we have done is to sink boreholes for them as we strive to give them piped water later. In areas where feasibility study has revealed that sinking borehole is not viable, we have embarked on constructing water pans."

Mwachitu said in the last financial year, his department received an allocation of Sh2 billion for water development in urban centres and in the rural areas.

This financial year, Mwachitu said, his department has been allocated Sh1 billion to invest in water projects, with Sh600 million given through the Kilifi and Malindi Water companies.