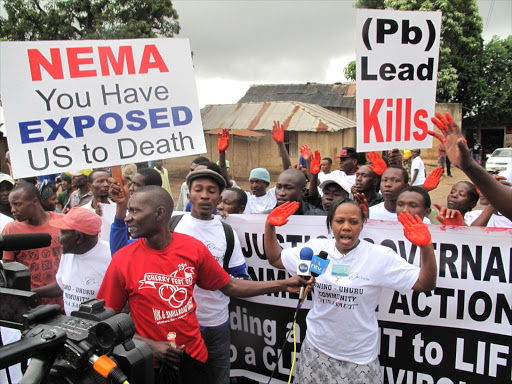 CLASS ACTION: Residents of Owino Uhuru slum in Jomvu, Mombasa county, during a protest against a lead company.
Image: FILE

Residents of Owino Uhuru slum in Mombasa have been awarded Sh1.3 billion compensation for death, sickness and damages caused by emissions from a lead smelting factory.

The money will go to the people in Jomvu who either worked for or lived next to the now-closed smelting plant, Metal Refinery EPZ.

The court said the ministries, agencies and company were liable for death and damages suffered by the residents.

Omolo said Nema was bore the greatest responsibility for damages at 40 per cent. The mental refinery that produced the lead would bear 25 per cent of the damages for negligence.

The two ministries were each found 10 per cent liable while the paper and book company was declared liable for five per cent.

Judge Omolo also directed the state agencies and private companies to clean the soil, water and remove any waste deposited within the settlement within 120 days.

If they fail to comply, the parties will have to pay Sh700 million that will be paid to the Centre for Justice Governance and Environment Action, the civil society organisation behind the class action suit.

It was closed in 2014 after at least five deaths were reported.