• They are the first Kenyan students to win the Diamond Challenge, the world’s top global entrepreneurship competition for high school students. 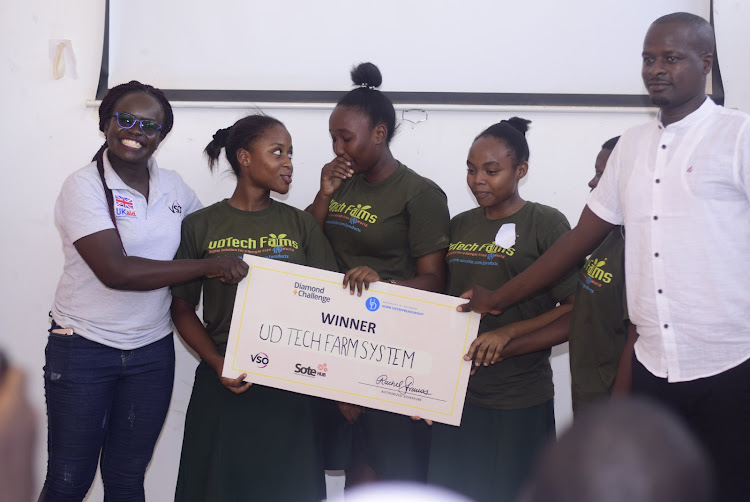 Their dreams to travel to the US might have been shattered by the coronavirus, but that did not keep four secondary school girls from inventing a global award-winning soil testing kit.

And bringing recognition to Kenya and their little-known Kasighau Girls’ Secondary School in Taita Taveta county.

They won the University of Delaware’s Horn Entrepreneurship Challenge and Sh150,000 to start a business.

The team of Rozalia Chao, Happiness Wanjiru, Sophy Mghoi and Hanifa Mutua had programmed a series of sensors with the Arduino system to run several soil tests at crop roots to maintain healthy crops.

They are the first Kenyan students to win the Diamond Challenge, the world’s top global entrepreneurship competition for high school students.

The global summit was conducted virtually through a video conference on April 18. The finals were streamed from multiple locations across the world.

The team emerged the national winners in the Diamond Challenge for High School Entrepreneurs on February 22 at Sote Hub in Voi.

They later won the top spot at the global summit.

"The team alongside two teachers were set to travel to the University of Delaware, USA, on  April 14 to represent Kenya at the Global Summit," school principal Mishi Mwaghogho said.

The virtual summit started with a pre-recorded pitch video submission in the semi-final round.

Then followed a series of e-mails, Zoom meetings, calls and post-it notes turning the three-day in-person summit into a two-week virtual experience.

The four girls won under the Special Topical Prize Award (Social Track Category) based on their concept of pulling various technologies together (Internet of Things, a mobile phone and the cloud) to solve a significant problem with a unique approach. They were awarded $1,500 (Sh150,000).

Mwanjewe, 16, said, “We aim to help farmers increase food production. Being among the continents faced with a food shortage, Africa needs to embrace this device. It is a game-changer.” She is in Form 3.

The system sends real-time notifications and recommendations to a smartphone application and through USSD for those without a smartphone.

“The award is not only an achievement for the school but also pride for the community at large," principal Mwaghogho said. He attributed the success to team spirit.

“Determination and research have been our secret weapon since the sub-county level competition. We had to polish our idea every day,” Rozalia, 17, said.

The form 4 student urged the government to help them realise their goal to boost food production.

Their ICT teacher and patron Arumba Amos said the students are on a path towards realising the power and promise of the 21st Century through creativity and practical courses.

He has mentored the girls from the early stage of the competition.

The UD-Tech Farm System enables monitoring real-time data on soil PH and nutrient levels by use of IoT system. It also does auto-irrigation which is controlled by a mobile phone app and USSD.

David Ogiga, the director of Sote Hub who organised the local competition, said, "Sote Hub is proud and it goes to show the success of our projects in rural Kenya. When given the right tools and opportunity, youth excels."

This year’s Challenge started out with 766 submissions, involving more than 5,000 high school students.