• Ferry crossing was one of the worst spots to be at as women, youth and children had teargas lobbed on them.

• County commissioner said it is unfortunate that police had to use 'some bit of force' to enforce government directives. 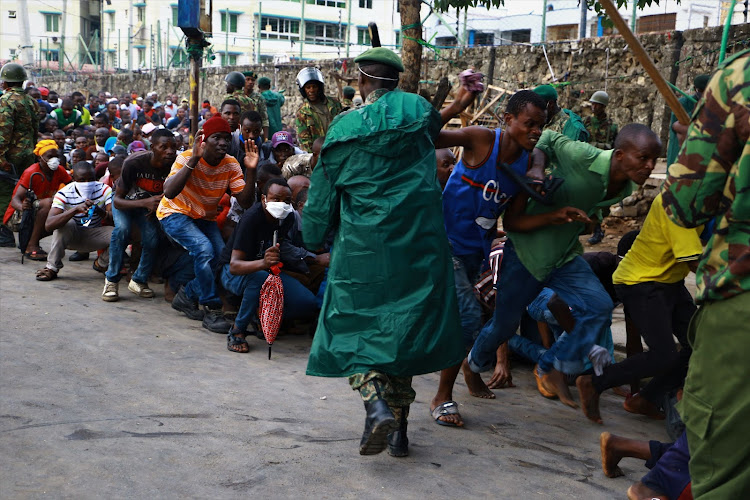 Panic, chaos and confusion marked the first day of the curfew in Mombasa.

In other parts of the Coast- Kwale, Kilifi, Tana River, Lamu and Taita Taveta - there was relative calm as residents adhered to the directive.

Regional police commander Rashid Yakub said the start of the curfew had been pushed to 8.30pm from 7pm in Mombasa because of the chaos witnessed at the Likoni crossing channel on Friday.

However, as the clock ticked towards 7pm, most people in Mombasa residential areas were in panic mode.

They feared they would not beat the time.

Bamburi resident Salim Nassir said he was home by 7pm.

"However, my brother was not. He was delayed somewhere and kept calling saying he was hiding in some building under construction because he feared the police," Nassir said.

Likoni resident Mwanahamisi Kombo, 22, said she was caught up in the Likoni chaos and had to struggle her way through the crowd.

"I am normally asthmatic. Teargas got into my eyes and chest, as we speak, I have had to get an inhaler from the chemist since my chest is congested and I can't access hospitals," she said.

Charles Onyango said he started running away when he saw others running.

"We were finishing our drinks around 6.45pm when we saw people running. We knew the police had arrived to impose the curfew. I took off."

Matatu operators took advantage of the situation to make an extra coin.

They ignored the eight-passenger directive and filled their vehicles, some carried even more than the normal 14 passengers.

"I was charged Sh50 from Lights to Bamburi.  Normally, the fare is Sh30," Cornel Oduor said.

The operators were also rushing passengers to also beat the curfew.

A conductor plying the Bamburi-Ferry route abandoned his vehicle when he saw police officers at Mwandoni, mid-journey to Bamburi.

By 7.30pm, Bamburi streets were empty.

However, there were reports of police beating up people in Utange, Mshomoroni, Barsheba and Kongowea Maweni.

In Likoni, some of the residents in Kiwarera village were caned after being found outside their houses.

"Some youth were chewing miraa outside their houses. Police used whips to force them back in," Tubonge Youth Initiative chairman Delvis Njue said.

Njue, however, said police assaulted others who were found outside.

A youth doing menial jobs, Charles Isiyo, said he was found near Ujamaa on his way home.

"Two canes fell on me, I am feeling so weak and my legs are swollen. Today I know better, I will not leave my house," he said.

County commissioner Gilbert Kitiyo said it is unfortunate that police had to use "some bit of force" to enforce government directives.

"What happened in some instances is not what was intended," he said.

He apologised on behalf of the government for any police action that was deemed unnecessary.

"Sorry to the journalist who faced harassment and any mwananchi who found themselves in difficult and brutal circumstances," Kitiyo said.

"The overzealous officers were definitely not acting as instructed. We must have a just society for all."

He said those aggrieved can obtain a P3 form or report to the Independent Police Oversight Authority.

"I hope there will be no repeat of such incidents and wananchi will abide by all given directions."