PRAISES POUR IN...NOT BY ALL

jailed for one year, tortured for convening and attending an illegal meeting.

• He said Moi oversaw massive corruption and embezzlement of public resources during his 24 years of Rule. 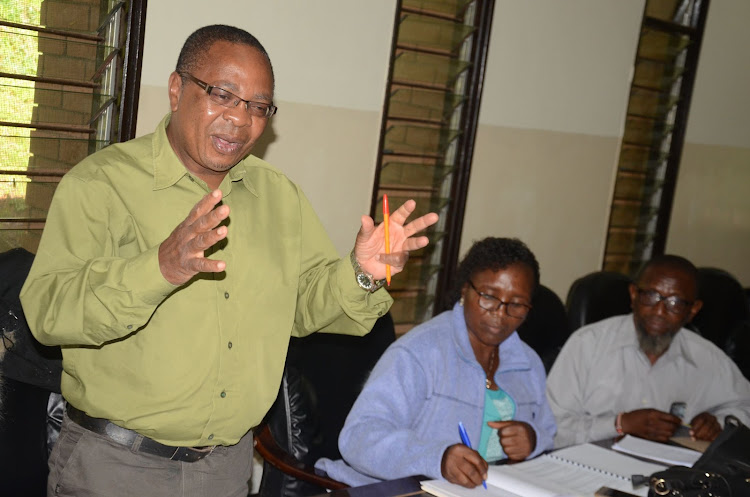 As largely uncritical, fulsome praises of former President Daniel Moi pour in, not everyone's heart is filled with forgiveness and love. Some speak bitterness.

Former political detainee Mwandawiro Mghanga on Wednesday has asked the government to own up to crimes committed by Moi and his regime by publicly apologising and compensating victims of torture and unlawful detention.

The former Wundanyi MP says he has not forgiven the late president — even in death — and will not do so until justice is served.

“Just like any other Kenyan, I am mourning the death of the former president. However, it is difficult to forgive somebody who beat you up and terrorised your family for no reason,” he said in an interview.

Mghanga vividly recalls August 18, 1982, when officers from the Special Branch Unit, now the National Intelligence Service (NIS), broke into his Kese home in Taita Taveta county and brutalised him and his family.

He would later be arrested and detained for 111 days without trial.

Mghanga was linked to activities of the Mwakenya movement, a union allegedly formed to seize power from power President Moi.

It was during this time, when Mghanga, a first-year student at the University of Nairobi, had joined opposition politicians to push for a multi-party system.

The push to unlock the political space and introduce competitive politics would later give birth to the failed 1982 military coup attempt.

He says his woes resulted from his pursuit of democracy.

Further, he said Moi oversaw massive corruption and embezzlement of public resources during his 24-year reign.

“We should have gotten a new constitution long ago had it not been for the selfish regime that wanted to stay in power forever.

Even after the burial, the former president’s family should be ordered to return all the public resources looted during his time in office,” he said.

The firebrand politician went into history books on February 10, 1985, when he inspected a guard of honour mounted by University of Nairobi students.

It was this daring act that saw him and other organisers of the meeting arrested by GSU officers and detained at Buru Buru police station where he was tortured.

He was jailed for one year for convening and attending an illegal meeting.

At the time, he was pursuing a master's degree at the University of Nairobi.

He said he had been marked by authorities for leading political awareness campaigns and activism on the campus. He was expelled in 1985.

He said, “The radicalisation of students was quickly gaining momentum because the government muzzled academic freedom as well as freedom of expression on campus.”

When released from detention, Mghangasought political asylum in Sweden.

When the Kanu regime collapsed in 20020, he successfully vied for the Wundanyi Parliamentary seat where he served between 2002 and 2007.

In January 2017, the High Court awarded him Sh10 million as damages for torture by the State in 1992. Judge Isaac Lenaola ruled that the politician's rights were breached and he ought to be compensated.

He declined to say if he had received the money.

“I was tortured, denied food and held in waterlogged cells for days without trial," he said. "I find it hard to forgive."