• Shiraz is now fighting to clear her name against charges of conspiracy to defeat justice, at the Malindi law courts where she was charged alongside a police officer, Sheikh Abdi.

• The officer is accused to have received a Sh45,000 bribe from her to allegedly conceal evidence. 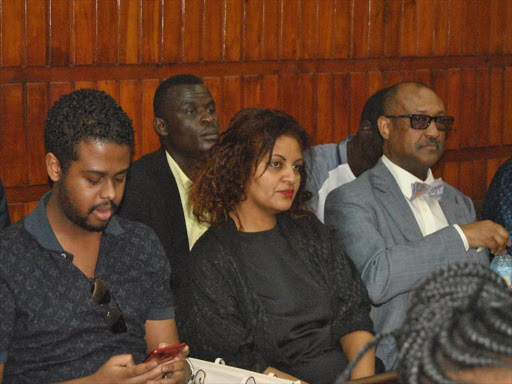 Amina Shiraz, the woman acquitted of the murder of businessman Jimmy Paluram Jagatram on July 26, 2015 is now fighting charges of conspiracy to defeat justice at the Malindi law courts.

She was charged alongside  Sheikh Abdi, a police officer who is accused of receiving a Sh45,000 bribe from her to allegedly conceal evidence. Abdi was the former investigating officer in the case.

The case will be mentioned on February 6 before Malindi chief magistrate Julie Oseko, who will give further directions in regards to Shiraz's acquittal by Justice Dorah Chepkwony.

Jagatram was found dead in a swimming pool in Watamu while on vacation with his family and Shiraz was charged with murder on October 13, 2016.

On November 4 last year, Shiraz was acquitted in what the courts said was a bungled and hurried up case.  The Director of Public Prosecutions and the police were accused of adducing evidence that woefully fell short of establishing her involvement in the crime.

Eighteen witnesses, including Jagatram Baburam’s parents, Brigadier David Baburum and Yodit Baburum, and their son, Obrien Baburum, testified against Shiraz and her American co-accused, Jacob Schamlze, who fled out of the country when the case was filed in court.

A public inquest had been set up but quickly wound up when two key witnesses, a guard and waiter, the only ones who claimed to have been at the scene moments after his death, claimed to have some information they had not earlier disclosed.

The police wrote to the DPP and they were advised to withdraw the pending inquest proceeds and arrest the duo on June 22, 2016.

While issuing her verdict, Justice Dora Chepkwong noted that an inquiry into the sudden death had not been opened as is the procedure, yet the police rushed to charge the duo with murder.

On December 3, 2019, the magistrate directed that she collects her passport from the High Court in Mombasa and re-deposit it at the Malindi law courts where she was charged with conspiracy, despite having been released on a Sh500,000 bail in the ongoing case.

Acquitting her, the judge noted, “The prosecution, therefore, must present a watertight case that meets the threshold beyond reasonable doubt in order to obtain a conviction. From the fore-goings, doubt has been raised in the evidence of the prosecution’s witnesses, especially the two witnesses,”

The statements of two key witnesses contradicted, rendering their evidence to be of probative value and their creditworthiness questionable, according to the judgment.

The judge also noted that most witnesses, including the deceased’s parents, only testified of what they had been told and were not at the scene.

The two married in 2012 and had two children.

They lived in Westlands and gone for a family holiday, where they had arranged for a barbeque dinner at the poolside on the day Jagatram died.

Chief chef Ashraf Hassan, one of the witnesses, was there ensuring their comfort.

Government pathologist Peter Ndegwa's examination showed the cause of death was drowning.

She added, “The guard, a protected witness, recorded three different statements, all stating different stories. One on October 29, 2015, another on February 27, 2016, and another on June 22, 2017. He admitted that in each statement, he made a declaration that he was telling the truth, yet in all three, there were different versions in terms of timings, dates and incidences,”

A waiter had said the deceased ordered for around six bottles of champagne which he drunk consumed and insisted that he looks for an alternative supply, even from an outside source.

“... he said he resigned from his work at the hotel since the hotel management wanted him to say things he had not seen. This court, therefore, finds it difficult to discern which of the statements by the two witnesses bear the truth. Are they retracted statements to the police or they are materially different in testimony in court?,” she posed.

She noted that it was difficult to tell whether the deceased had collapsed, drowned or suffered an epileptic attack.

In his evidence, the watchman said he saw the accused and Jacob immersing the deceased into the water.

There was an allegation that the deceased was under the influence of drugs but when they interrogated his doctor, he gave the deceased a clean bill of health.

The deceased’s father was taken through a report prepared by Dr Ranchod and he confirmed that the deceased had collapsed on several occasions and hospitalised,

“The deceased had been advised not to indulge in drugs and alcohol. He (his father) had no reason to doubt the findings of the medical report. He did not doubt the autopsy report prepared by Dr Ndegwa. The deceased had no external injuries on his body,” the court noted.

Instead, Baburum agreed that the deceased had been partying and taking alcohol against the doctors’ advice.

“Given the contradictions, doubts, anomalies and shortfalls that have been noted in the evidence of the prosecution witnesses, and lack of concrete evidence identifying the accused as the perpetrator of the offence, I find the prosecution has failed to establish a prima facie case to warrant the accused person being called upon to defend herself,” she concluded.