Caroline Mkala, 13, scored 315 marks in KCPE but opted to become a maid after mother failed to raise school fees

'This is a miracle and I have promised my family and the community that I will work hard in my studies. I would wish to touch other lives in future. I thank the governor for the opportunity' 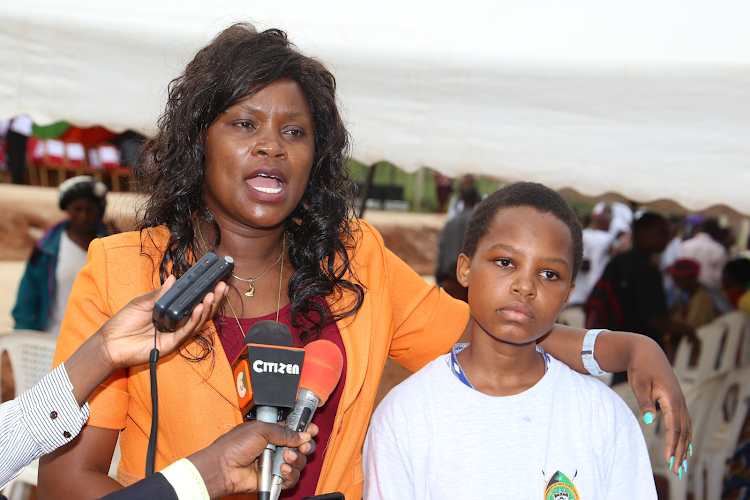 Caroline Mkala, 15, was filled with joy as she bought books at a Voi bookshop in preparation for joining Form One this week.

She is among the 100 bright but needy students who have been awarded a full scholarship by the Taita Taveta county government.

But Mkala is not just lucky. Only two weeks ago, she had been employed as a househelp in Nairobi from where she was rescued and taken back to school.

She sat her KCPE at Priscilla Mwangeka Primary School in Voi and got 315 marks. She was set to join Murray Girls in Mwatate on Wednesday.

For her, it is a dream come true with her ambition to pursue a nursing career rekindled and now firmly on course.

“I had no hopes of joining secondary school. My mother could hardly afford food in the house, so I decided to move to a relative’s house in Nairobi. I later got a job as a maid with the aim of raising money to help my family and save for my school fees,” a tearful Mkala told the Star during the interview on Monday.

The girl said her jobless mother had given up on her education after she failed to raise the required Form 1 fees hence her decision to become a househelp.

“This is a miracle and I have promised my family and the community that I will work hard in my studies. I would wish to touch other lives in future. I thank the governor for the opportunity,” she said of the scholarship.

Naomi Wangoi, her primary school teacher, said she learned through Mkala's mother that she had moved to find a job in Nairobi. She later rescued her, promising to find well-wishers to fund her education.

“She has been a bright student and I had planned to award her for performing well in my subjects, only to find out that she had secured a job in Nairobi instead of joining Form 1. I moved with speed and brought her back home. I am happy she will be joining Form 1,” Naomi said.

The teacher said poverty had pushed many girls to join child labour and eventually fall victim to early marriages.

“Stakeholders should pull resources together so that all students can go to school. Education is a sure way of empowering the society,” she said.

She asked primary school teachers to trace students who had not reported to their new schools to join Form 1 so the 100 per cent transition can be realised.

Speaking during the awarding of scholarships in Mwatate, Governor Granton  Samboja said the scholarships shall be withdrawn if beneficiaries perform dismally in their exams.

“As your patron, any student scoring a mean grade of C+ and below in any end of term exam shall receive a warning and subsequently dismissed,” Samboja said.

He said 54 warning letters have already been issued to poor-performing students who are currently in Forms 2, 3 and 4.

"Study hard to ensure you don't lose this opportunity. We won't spend taxpayers money on students who do not perform well in school. I beseech you to place emphasis on your studies," Samboja said.