Baburam widow, cop have case to answer in businessman's murder

Suspects to appear next month for mention

• Cop allegedly received money via M-Pesa from the widow to conceal evidence of businessman's murder.

• Baburam died in unclear circumstances while on a family vacation, witness said he saw suspects struggling with him while in swimming pool where he drowned. 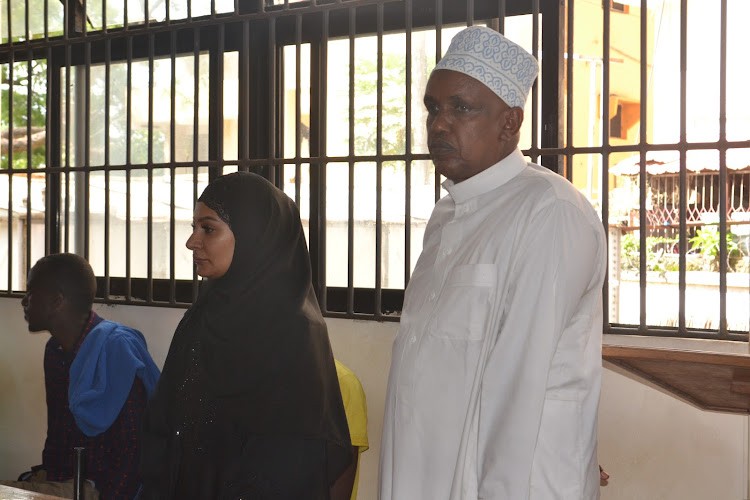 The widow of a murdered Nairobi businessman Jimmy Baburam and a police officer have a case to answer in connection with his death.

A Malindi court has put on their defence the widow Amina Shiraz and Sgt Abdi Shee, formerly in charge of Watamu police station's tourism unit.

They are accused of conspiring to conceal his death.

Malindi chief magistrate Julie Oseko said on Monday she made the decision after studying all the submissions and issues raised by the prosecution.

"I am satisfied that the prosecution has established a prima facie case, you have a case to answer," she said.

Immediately after the ruling, defence lawyer Kimani Gicheru explained to the accused persons the consequences of having a case to answer. Gicheru told them they can decide to keep quiet and let the court make its judgment, they can bring witnesses and defend themselves or they can take an oath to be on their defence in the dock.

He requested the court to set a mention date so they can deliberate on the option to make. The case will be mentioned on December 9.

Shee and Shiraz allegedly conspired to conceal evidence of the murder of Baburam. Shee reportedly received Sh45,000 through M-Pesa from Shiraz which was sent in two different transactions to conceal murder evidence.

Shiraz and American fugitive Jacob Schmalze, who is on the run, are also facing a murder case at the Mombasa High Court where a ruling will be made on December 3.

In their Malindi submissions, Shee and Shiraz had asked the court to dismiss the case claiming the prosecution failed to prove beyond a reasonable doubt that the suspects conspired to defeat justice.

Baburam died under unclear circumstances while on a family vacation at Amani Villa of Medina Palms Resort on July 26, 2015. He drowned in a swimming pool.

Last year, a witness told the court he was on patrol about 20 metres from the swimming pool and saw the two suspects struggling with Baburam who was inthe pool.