CAR SLID FROM FERRY IN SEPTEMBER

Other passengers said he appeared to be anxious and unstable.

•Man is said to have left his seat, run towards the stern, dived and plunged into the water.

• KFS said that the rescue efforts were hindered by darkness and strong tides. 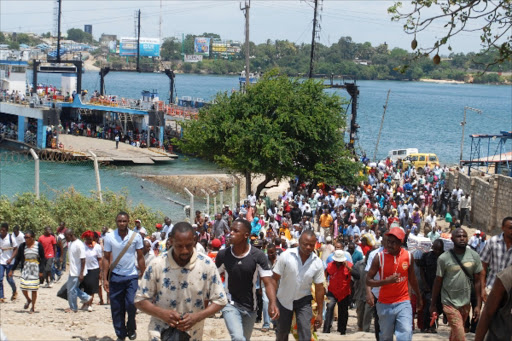 The body of an unidentified man who plunged into the Indian Ocean on Sunday from the MV Harambee is yet to be recovered.

Likoni OCPD Jane Munywoki said the rescue mission by the maritime police and beach management units will continue until the body is recovered.

“We have not identified the victim, no person has come forward to report missing kin of that nature,” she said.

She appealed to any person whose loved one went missing to contact ferry police as they search for the body.

Kenya Ferry Services said in a statement that the passenger was dressed in a white vest and black trousers.

The statement said he seemed not to be in his right mind as the ferry crossed from the mainland to the island side.

He is said to have left his seat, run towards the stern, dived and plunged into the water.

KFS said that the rescue efforts had not succeeded partly because of strong tides and darkness.

It is the same ferry whose gates were broken on September 29, when a vehicle whose occupants, Mariam Kaghenda, and her four-year-old daughter, slid into the sea.

Their bodies were found 12 days later.