Why SGR can't wipe trucks off of the roads

Hue and cry over SGR directive,, yet it appears to to be telling truth: only a small fraction goes by SGR

•The leaders warned if sitution not handled well, SGR freight services will automatically die because this transport mode is not currently competitive, Mbogo says.

•Railways says only 30 per cent cent of cargo goes by SGR. 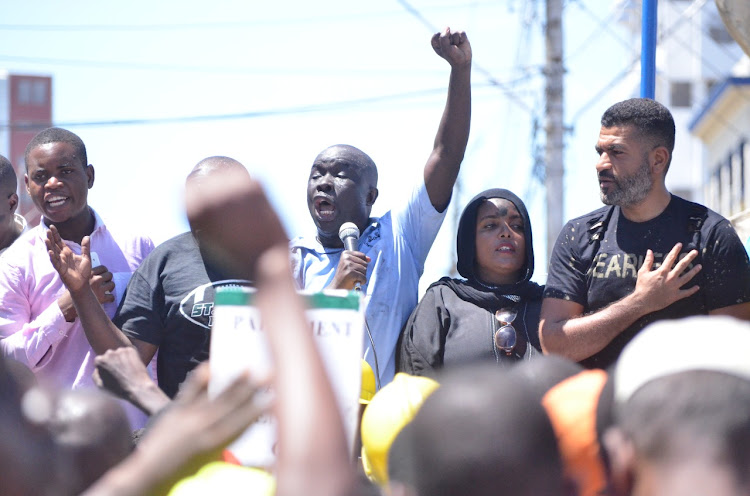 Kenya Railways says has been transporting only 30 per cent of the total cargo from Mombasa port on the standard gauge railway.

Seventy per cent of the cargo from the port has been going by road, says Kenya Railways, which is in charge of hauling cargo from Mombasa via the SGR.

Yet for weeks, truckers, freight container staff and others have been demonstrating, claiming that they are losing business due to an SGR-only government directive.

The reality is SGR has been transporting 25 to 30% of the total cargo. There is still a huge business in the control of the road transporters.  We are just complementing what they do.

The government says it has been suspended twice, but demonstrators want it officially withdrawn and de-gazetted.

During an interview with the Star at the Port of Mombasa, Tomas Ojijo said there is no possibility the SGR is pushing the road transporters out of business.

“The reality is that SGR has been transporting between 25 to 30 per cent of the total cargo. There is still a huge business that is still in the control of the road transporters.  We are just complementing what they do,” Ojijo said.

For seven consecutive weeks, the transporters, truck drivers, clearing and forwarding agents, Container Freight Stations workers and human rights groups have been staging protests in the streets of Mombasa demanding for the lifting of a directive on compulsory haulage of cargo via SGR from Mombasa to Nairobi Inland Container Depot.

Transport CS James Macharia   insisted that the directive has since been suspended but transporters say, "things are no different on the ground.”

The aggrieved parties have formed a movement called Fast Action Business Community (FABC), which has been organising the street demonstrations within Mombasa CBD.

However, the Transport CS, the Kenya Ports Authority management and the Shippers Council of East Africa have maintained that the directive is not in place and that importers are allowed to use their preferred transport; either SGR or road.

The Kenya Railways operations manager says the choice of whether to use road or the SGR is mostly made at the port of loading.

"The bill of lading is what is mostly determining what mode of transport will be used once the cargo reaches Mombasa. If the bill of lading stipulates it is through SGR, there is no way we can change it here," he said.

He described the demonstrations as unwarranted, saying "There is business for everyone."

James Siele, business, commercial and operations leader at Kenya Railways, says transporters prefer the SGR as it is taking only eight hours to transport cargo from Mombasa to Nairobi ICD, while it takes three days on the road.

During the meeting, according to Kisauni MP Ali Mbogo, the Coast leadership expressed fears to the national government of the impact of SGR on the Coastal economy.

Speaking during a morning talk show on a radio station in Mombasa on Monday, Mbogo said the SGR should be made competitive and to freely compete with the road transport sector.

Mbogo said they explained to the two Cabinet Secretaries that the SGR has numerous hidden costs compared to trucks.

“We cannot force Kenyans to transport goods via the SGR. We need to make SGR competitive and allow Kenyans freedom of choice,” he said.

Mbogo’s remarks are supported by FABC who also complains of hidden cost in SGR freight services.

“When using the SGR, you pay up to Sh40,000 more compared to using the road network,” said FABC chairperson Salim Karama.

Karama insisted that they are not against the SGR, but the government should not force transporters to use it, arguing that it is expensive compared to truckers.

On the compulsory directive of cargo haulage via the SGR, Karama said it is still being implemented.

“It is only Mombasa-bound cargo that is allowed on trucks. All other cargo destined for Nairobi and beyond is still being loaded on the SGR,” he said.

However, the Shipping Council of East Africa (SCEA) CEO Gilbert Langat said assertions that all cargo is still being loaded on SGR freight train is not true.

The numbers have remained relatively the same since SGR started moving cargo to Nairobi. Therefore, the hue and cry about all cargo being transported to Nairobi via the SGR is not true.

Lang’at said he is aware of importers who have been able to pick their cargo from the Port of Mombasa and transport it via road to Nairobi.

“What we have been hearing most is the protests, but I don’t know whether they are protesting against the directive or because people cannot pick their cargo from the Port of Mombasa. However, when I look at the numbers at Nairobi ICD, they tell a different story,” Lang'at said.

He said if the SGR trains were moving all cargo to Nairobi, then over 8,000 containers will be arriving at the Nairobi ICD every week.

“The numbers have remained relatively the same since the SGR started transporting cargo to Nairobi. Therefore, the hue and cry about all cargo being transported to Nairobi via the SGR is not true,” he said.

SCEA executive concurred that the SGR directive remains an illegal order since it does not actually exist in writing.

“If you ask me, actually there was no directive at all. Everybody says there was a directive but I have asked for the document that contains the directive and there is none,” Lang’at added.

“They are just playing with people’s minds because there is no document that is evidence of the directive. You can only withdraw a written directive,” he said.

On his part, the national chairperson of the Kenya International Freight and Warehousing Association reported that hinterland bound cargo at the port was still ferried via SGR.

“Nothing has changed,” Roy Mwanthi said.

The FABC has already moved to court to challenge the police for blocking their weekly protests. On Tuesday, the court ruled that the FABC is free to continue with the demos.