• Fast Action Business Community has promised to boycott the event, plans to hold a parallel one.

• Mombasa residents bitter after reports retrieval of ferry tragedy bodies delayed despite Kenya Navy officers being a short distance away rehearsing for the fete. 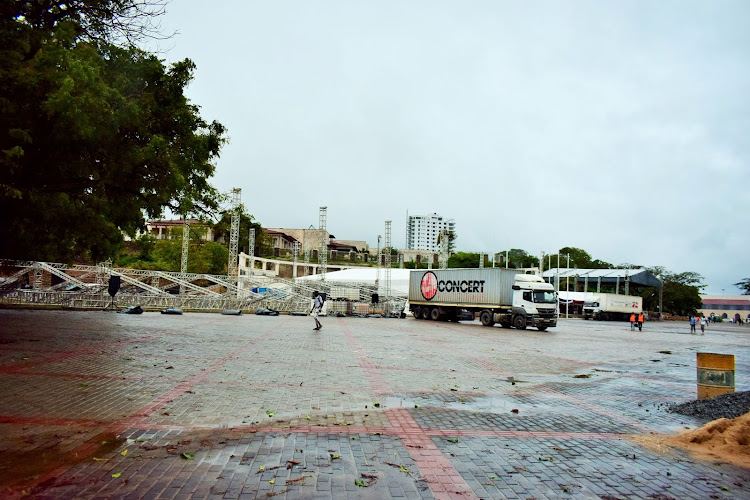 Preparations for Mashujaa Day celebrations in Mombasa on Sunday are complete despite a dark cloud lingering over the event.

There are fears among government agencies the fete might record a poor turnout owing to the bitterness that Mombasa residents have over the Likoni ferry tragedy on September 29.

Mariam Kighenda, 35, and her four-year-old daughter Amanda Mutheu drowned in the middle of the Likoni crossing channel after their car slipped off the ferry.

Reports indicate that attempts to retrieve the car and the two bodies did not begin until a day later despite government's assurance that rescue attempts by both the Kenya Ferry Services and the Kenya Navy began a few minutes after the incident.

All the while, military ships were passing along the channel in preparation for Sunday’s celebrations, which will be held at the revamped Mama Ngina Waterfront Park.

The park is only a few metres from where Kighenda and Amanda met their deaths.

This is what angered Kenyans, most of whom have pledged to give the event a wide berth.

On Tuesday, the government launched a campaign to get Mombasa residents to attend the event.

“From today we want to do a vigorous campaign to sensitise people on the Mashujaa Day celebrations,” Mombasa county commissioner Gilbert Kitiyo said.

Truckers, civil society organisations and traders have promised to boycott the event to protest a controversial directive to exclusively use the SGR to haul cargo from the Mombasa port.

Muslims for Human Rights rapid response officer Francis Auma said they will instead use the opportunity to pray for the souls of Kighenda and Amanda at the Tononoka Grounds.

However, Kitiyo said no other meeting will be allowed in Mombasa on Mashujaa Day and invited the truckers, civil society and traders to attend the celebrations.

“We are inviting all Kenyans. Even those with grievances. Those are like the child who goes against the mother. At mealtime, they will come back looking for food,” Kitiyo said.

Fast Action Business Community chairman Salim Karama on Monday announced that they would hold a parallel meeting to the October 20 event.

Falling on a Sunday is also another complication organisers of the fete face as most people will be attending church services.

Kitiyo on Tuesday appealed to them to skip church as there will be prayers at the celebrations too.

“This thing goes with the calendar. If it falls on a Sunday, that is when we will conduct the celebrations. “Those who go to church, bear with us that day. They can go to church later," he said.

He said the doors to the event venue will be opened as early as 5am.

“The biggest work we are doing from now till then is to announce to all Kenyans and all citizens that we are ready for them,” the administrator said.

President Uhuru Kenyatta will, for the first time, get a naval salute from the Kenya Navy at the event.

“That day we will witness war ships giving a salute to the Commander-In-Chief of the Defence Forces,” the county commissioner said.

He said security agencies have mapped areas they deem could have trouble.

“We are well prepared. All should come without any fear. Everything is under control,” he said.

Kitiyo said the Kenya Navy divers who were part of the multi-agency team that retrieved the bodies of Kighenda and Amanda will be paraded as heroes and celebrated.