• Directive to ferry all cargo from Mombasa Port via  SGR has been suspended but truckers and others want it rescinded altogether 'as you cannot suspend an illegality'. 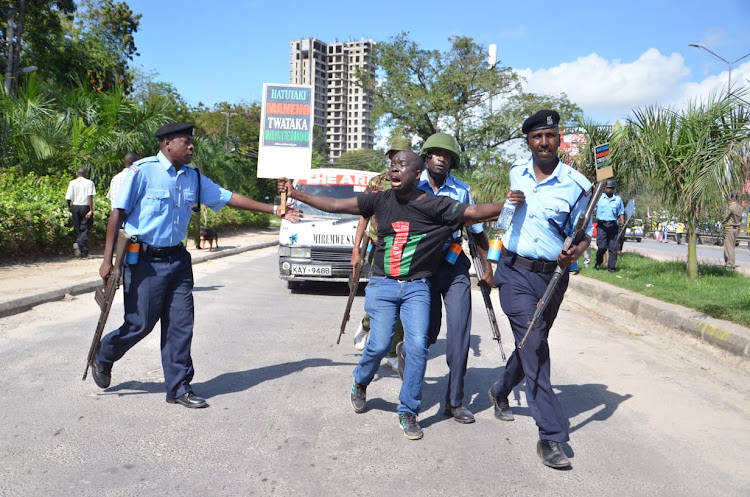 The government may have withdrawn its order to exclusively use the SGR to haul cargo from the Port of Mombasa.

But the battle isn't over.

Truckers, civil society organisations and traders say they will march to State House, Mombasa, on Monday to pressure the government to officially withdraw the order on compulsory haulage of all Mombasa cargo via the SGR.

They also plan to boycott Mashujaa Day celebrations and hold a parallel rally at Tononoka Grounds.

The government announced on October 3 that the directive had been suspended but protesters from the Fast Action Business Community said they will continue to demonstrate until the directive is explicitly withdrawn.

They say they still cannot freely access the Port of Mombasa.

Protesters said the directive was illegal and should, therefore, be rescinded, not just suspended. They said the order will kill thousands of jobs of long-distance truck drivers, CFS staff and others.

We will boycott the presidential function at Mama Ngina.

“You cannot suspend illegality. We want the directive rescinded altogether. On Monday, we will meet at Treasury Square and march to State House Mombasa,” FABC chairman Salim Karama said.

It would be the sixth weekly demonstration by the FABC, but it might never happen because of the heavy police presence when President Uhuru Kenyatta is in town.

The President will preside over Mashujaa Day celebrations on October 20 at the refurbished Sh460 million Mama Ngina Waterfront Park.

On October 18, he is expected to meet Coast leaders over the SGR stand-off, but FABC says they were not involved in planning that meeting.

“We will boycott the presidential function at Mama Ngina," Karama said.

During the rally, he said, they pray for the souls of Mariam Kighenda and her four-year-old daughter Amanda Mutheu who died when their car plunged off a Likoni Ferry on September 29.

It took government agencies and Kenya Navy 13 days to retrieve the vehicle and the bodies.

“Apart from protesting against SGR, we will be remembering our sister Mariam who died at Likoni," Karama said.

Last week on Monday, about 13 members of the community were arrested after police officers manning the Nyali Bridge roadblock stopped them from entering the Central Business District.

On Monday, the demonstrators changed tact and began their protest from Buxton area using Ronald Ngala Road, connecting with Jomo Kenyatta Avenue before going to Mombasa CBD along Digo Road and then to Moi Avenue.

The three-hour protest was not disrupted by the police who were following closely.

They were joined by Mvita MP Abdulswamad Nassir along Digo Road.

However, Nassir kept off the Mashujaa Day topic and Monday’s State House march.

Nassir said he was happy that the weekly protests are gaining momentum and that their voices are being heard by government agencies.