• Postmortem to be conducted on Monday. 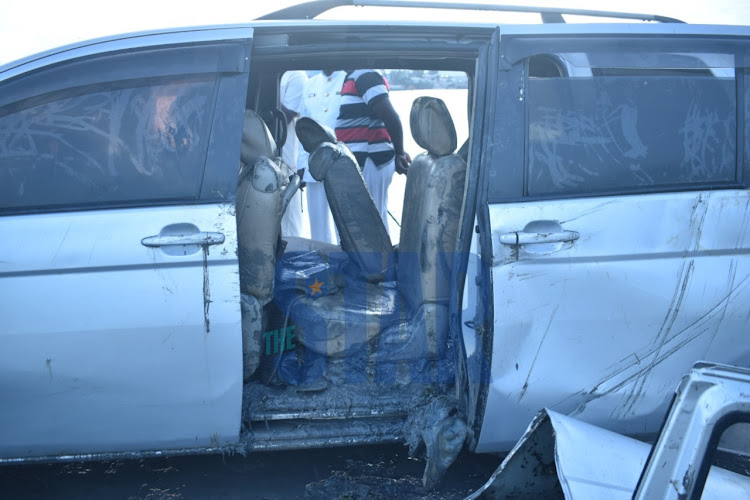 The vehicle retrieved from the ocean on Friday, October 11, 2019.
Image: ANDREW KASUKU

Directorate of Criminal Investigations detectives have begun a probe into the circumstances leading to the death of a mother and her daughter when their car slid off the Likoni ferry.

The car was retrieved on Friday and the bodies of Mariam Kighenda and Amanda Mutheu were found inside, 13 days after the vehicle plunged into the ocean.

On Sunday, Likoni Police boss Benjamin Rotich said five people had recorded statements over the tragedy that led led to a public outcry over the poor state of ferries.

"We have questioned five people and the probe will continue," he said.

Among those questioned include a coxswain, two ferry staff who help directing vehicles inside the ferry and two guards from a private security firm.

Speaking last week during the retrieval operation, government spokesman Cyrus Oguna had told the Star that investigations would kick off after the car and bodies were retrieved.

"If the reports after investigations show that the accident was out of laziness, then we will take action. For now it's an accident," Oguna said.

Kenya Ferry Services MD Bakari Gowa dismissed reports that he had been summoned to record a statement, but welcomed the investigations.

"If the DCI will come, let them come, we are here," he said on the phone on Sunday.

Rotich said that Gowa would be questioned 'if need be', adding that "he will come but as of now, we have not reached that stage."

The bodies of Kighenda and Mutheu will undergo a postmortem at Coast General Hospital Mortuary on Monday.

On Saturday, Makueni Governor Kivutha Kibwana visited the family at their home in Tudor.

He called on the government to improve security at the crossing channel.

Investigators had a hard time separating the bodies.
News
2 years ago

Likoni ferry tragedy exposes shame of our unpreparedness and buck-passing

Family waited in agony, asked to pay for divers, as blame game raged.
News
2 years ago

These underwater photos are not from the Likoni Channel

None of the photos is from Kenya as claimed in the post
News
2 years ago
Post a comment
WATCH: The latest videos from the Star
by ANDREW KASUKU
Coast
13 October 2019 - 13:08
Read The E-Paper