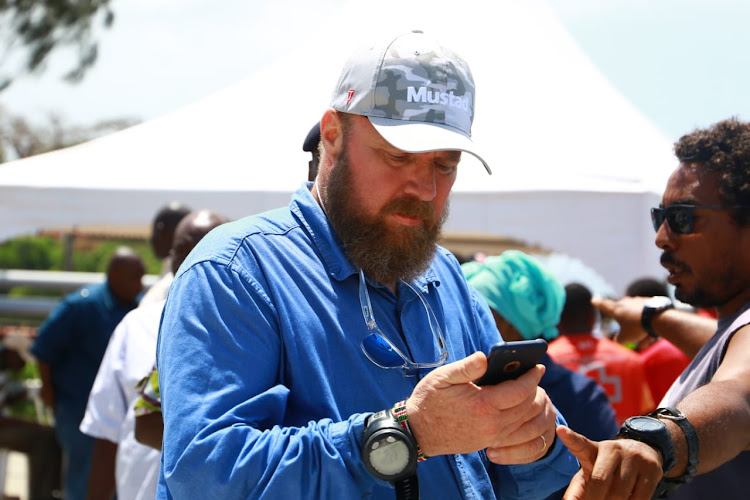 Swedish scuba diver Volker Bassen on Friday evening dashed the hopes of the family of 35-year-old Mariam Kighenda after failing to locate and retrieve her body and that of her 4-year-old daughter, Amand Mutheu from the Indian Ocean.

Kighenda’s family had high hopes that the five-day search for the remains of their loved ones would come to an end after Bassen on Thursday said he could locate and retrieve them in two hours.

The Swede, who is married to a Kenyan wife and has been living in Kenya from the 1990s, was part of the team that made a total of 16 dives into the ocean in the recovery efforts at the Likoni crossing channel.

"I realised that I underestimated the conditions here," said Bassen, who briefed the media at around 6.45pm.

He was accompanied by government spokesperson Rtd Col Cyrus Oguna, the family of Kighenda, 35, and a host of other members of the multi-agency team that is conducting the recovery operation.

Oguna said the 16 dives were in three locations that they had identified to be the most likely areas the car Kighenda and her daughter were in could be found.

“Up to now, we have hopes but we have been unsuccessful,” said the government spokesperson.

He however said the recovery operation will not be stopped.

“We will use the robot to continue to do more search and collect more data,” said Oguna.

Bassen said there is zero visibility in the water making the operation daunting.

“The water is very deep and there is terrible current that makes it quite difficult for us to locate the car,” said the Swede.

He however said they did have two promising sightings of where the car could be.

One at 40m where they actually managed to dive into and stay there for 32 minutes.

“That was a negative,” Bassen said.

The other is about 50m but where they could not dive into because of the ferry traffic.

“It’s not going to be an easy task. That’s for sure,” said the scuba diver.

He however said he will not be involved in any further recovery operation as he has to travel on Saturday.

He said he would accord the Navy any assistance he can.

Bassen heaped praise on the Kenya Navy describing them as ‘brilliant’ and ‘incredible co-divers’.

“They dive in these murky waters, shark-infested waters without shark shields. They are putting their lives on the line,” he noted.

His earlier statement that he could locate and retrieve the car was seen as an indictment of the Kenya Navy and other authorities responsible.

The statement had so ignited so much hope that one of the family members was overheard saying Bassen was heaven-sent.

“I believe that European was sent by God,” said one of the family members who was seated at the information tent minutes after Bassen’s arrival at around 10.30am.

Bassen said the fact that the Kenya Navy personnel are risking their lives in a recovery operation and not a rescue operation speaks a lot about the Navy.

“I don’t mind putting my life at stake to save somebody else. But when it comes to a recovery operation, maybe it’s time to reflect on the risks involved for everybody who is trying to recover this vehicle and the bodies because they are doing so at a risk to their own lives. So, please keep that in mind,” said Bassen.

“I have seen on social media that there is a lot of flak on the Kenya Navy. Believe you me, they don’t deserve that. They are brilliant in what they are doing,” said he said.

“If anybody can find the vehicle and the bodies, it’s going to be them.”

The recovery team had earlier identified 14 locations where the vehicle could be found.

On Friday, Bassen said the Navy will on Saturday concentrate on one of the two promising location that he managed to find – the 50m location.

“What we need to do though is to close the ferry traffic for maybe an hour so that we are allowed to go there and see what it is,” said the Swede.

He said they searched the area with a 3D scanner and found that there is a huge drop-off where the vehicle allegedly sank.

“The second possibility is that the car actually went down in the deep channel here, which is 60m deep,” said Bassen.

Because it is a narrow channel, the current there can be up to six or seven knots (nautical miles per hour) which is equivalent to about 12km per hour.

“If that was to happen to the car it could be anywhere. It’s like looking for a needle in a haystack because the channel continues several kilometres both inland and outland,” said Bassen.

“I know of one case where actually a whole lorry went in here a couple of years ago and it was found like 2km inland,” said the scuba diver.

However, Oguna said nobody can predict how the recovery operation will end.

He said the recovery operation team is relying on science to determine and verify possible locations where the vehicle and the bodies can be found.

He said human have limitations but that will not stop the Navy and other people involved in the operation from trying their best.

“We will return Saturday to try and find out but then there is also the possibility that whatever might look promising could also be just an amount of mud.

“So, let’s be hopeful that tomorrow will be a better day than today,” said Oguna.

He said they cannot said to any degree of certainty that they will be successful.