• Police engaged the students in running battles for two hours, with teargas canisters flying in the air as the students threw back stones.

• Businesses were closed down for fear of looting as the irate students confronted motorists before more police from anti-riot unit arrived. 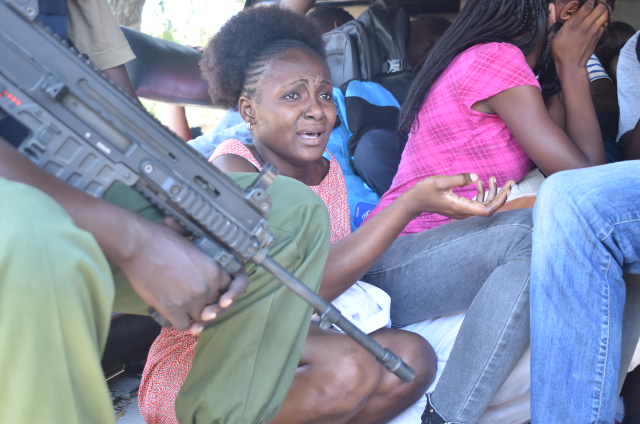 25 Technical University of Mombasa students who were arrested for staging protests at the institution over alleged new academic policies on Tuesday have been released.

Makupa OCS Mohammed Osman confirmed that indeed they were arrested but have been released.

On Wednesday morning, the officers engaged the students in running battles for two hours as teargas canisters were lobbed at the students who threw back stones and blocked feeder roads outside the institution.

The students lit bonfires at the Buxton junction along the Malindi road as they vented their anger towards the administration’s plans to introduce new academic policies at the start of the semester.

Businesses were closed down for fear of looting as the irate students confronted motorists before more police from anti-riot unit arrived.

About 15 of them were bundled into a police car before being taken to Makupa Police Station.

“Just two weeks after re-opening the semester and the university has introduced tough rules without consulting us. We won’t get back to class until they abolish the polices,” said Gilbert Wafula, a third-year Communication student.

Flanked by other students, he said one of the new academic policies requires the students to stay out of the university for one academic year after getting a supplementary, against an initial policy that allowed students to continue studies as they await to retake the exams

“We want the university to understand that it's not a crime to fail exams,” another student Vincent Ochieng said.

Protests at the university based in Tudor area are not uncommon.

In December last year, scores of students were arrested in violent protests after the varsitie's decision to deregister students who had not completed school fees.

But in a rejoinder, TUM VC Laila Abubakar said, “The students don’t understand, the new policies even favor them. Instead of Repeat Stay Out, we have introduced a retake which you are allowed to study awaiting the exams at the end of the semester.”

She denied alleged tough policies saying that changes were done after consultations with student leader at the senate meeting.

“We don’t want the students to continue up to fourth year with backlog so the issue of missing marks will be a thing of the past,” she said.

Kenyans on Twitter have expressed their anger at the police for brutalising rioting Maseno University students on Sunday. This was after videos ...
News
1 year ago

A group of students at the Technical University of Mombasa has vowed to stage a third demo to disrupt end of semester exams scheduled to begin ...
News
1 year ago
STAR COMMUNITY POLICY AND PARTICIPATION GUIDELINES
by ANDREW KASUKU
Coast
18 September 2019 - 15:17