SHE CAN NOW MOVE 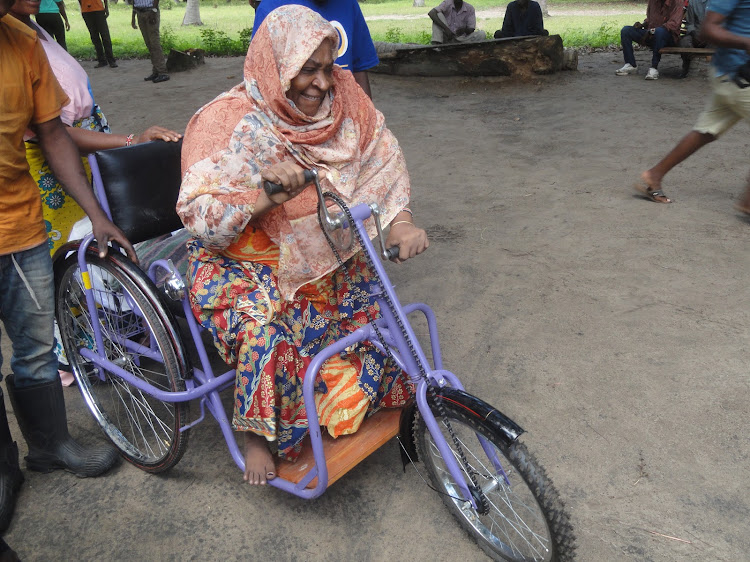 A woman who was paralysed 33 years ago has received government support after her plight was highlighted in the media.

Sofia Michael could not hold back her joy when a team from the National Council for Persons with Disability and the county government of Kwale brought her a brand new tricycle, food and bedding.

Speaking on Thursday at her home in Mwangwei in Lunga Lunga subcounty, Sofia said the help was a great relieve for her.

“I don’t know how to express my joy, but you have freed me from slavery. Ever since the incident, I have been crawling like a child,” she said.

Sofia said it had been a tough journey raising the family all by herself since her husband passed on a few years after she gave birth to her last born daughter, now aged 33.

Her disability was bought by a rare condition called arteriovenous malformation (AVM) during her last pregnancy. She can only use her arms.

Sofia said the worst time was when doctors confirmed that she could never walk again.

“Thank God I delivered normally. My baby was in good condition but what shocked me was when I realized that I had to spend the rest of my life this way and blamed myself for giving birth at home. Maybe I could have been helped if I had gone to hospital early enough,” she said.

She said she would keep herself busy by running a small grocery to reduce the burden of being dependent.

“I will ask my daughter to go to Kongowea market so that I can sell vegetables, fruits among other things here since I can now freely move around,” she said.

Kwale NCPWD regional coordinator Joan Koima said plans are under way to register Sofia as a person living with disability so that she can benefit more from projects under the disability scheme.

“It has taken us long to notice Sofia because she was not registered. We shall cooperate with other departments who will create awareness on the importance of registering and joining disability groups. In that way it will be easy for us to find them and give help,” Koima said.