• On Sunday, at least three businessmen told the Star, they are forced to part with sums ranging between Sh200,000 to Sh300,000 per week in order for their cargo to be cleared.

• The businessmen also said their consolidated cargo are treated as individual cargos thus are forced to part with bigger sums in taxes. 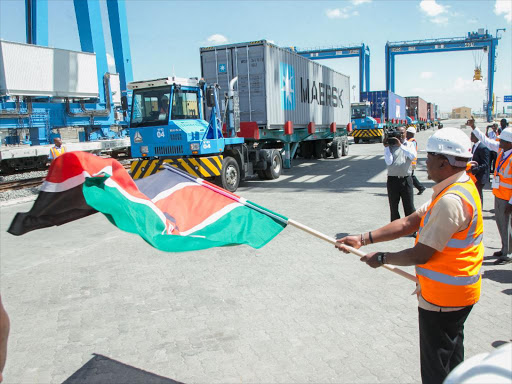 A team of investigators at the Kenya Revenue Authority have launched a probe into graft allegations at the Inland Container Depot in Nairobi.

This is after importers complained of being deliberately frustrated by a group of senior KRA officials at the ICD.

On Sunday, at least three businessmen told the Star, they are forced to part with sums ranging between Sh200,000 to Sh300,000 per week in order for their cargo to be cleared.

“For those with Godfathers, they are safe. But people like us who are small scale, we have nowhere to go to. If we don’t comply with their demands, our cargo may stay at the depot for up to six weeks,” said one of the businessmen.

The businessmen also said their consolidated cargo are treated as individual cargos thus are forced to part with bigger sums in taxes.

“This is wrong. Consolidated cargo are supposed to be treated as one package that should attract a specific amount of tax,” said another businessman.

On Sunday, KRA deputy commissioner in charge of marketing and communications Grace Wandera said the matter has been reported to the investigations department for a probe.

On Monday, the KRA Complaints and Information Centre said they have escalated the matter and a probe has been launched.

“The complaint has been noted and forwarded to our investigation team for action,” said the CIC.

He asked President Uhuru at the ASK Mombasa International Show to ensure government agencies like KRA, Kenya Ports Authority and Kenya Bureau of Standards make it easier for investors, importers and other small scale businessmen to do business.

“Don’t make it a nightmare. Sometimes it is so hard to import consolidated cargo,” said Joho.

He said government agencies should only ensure goods brought into the country are of the required standards and not frustrate businessmen over other things.

In May, President Uhuru made an impromptu visit at the ICD after businessmen complained of delays in the release of their cargo.

Some of the traders had also complained that their cargo had been detained over various ‘issues’ and would not be released until they part with ‘something small’.

Uhuru however ordered that the containers be cleared within three weeks.

Import, export cargo to be vetted to root out tax evaders

Makes impromptu visit to ICD at Embakasi after complaints over delays of cargo release.
News
3 years ago