MP says they will provide essential items so the students are not sent home.

• Fire reported to have started during evening preps so no one was hurt.

• MP says arson not ruled out as police launch probe to establish the cause. 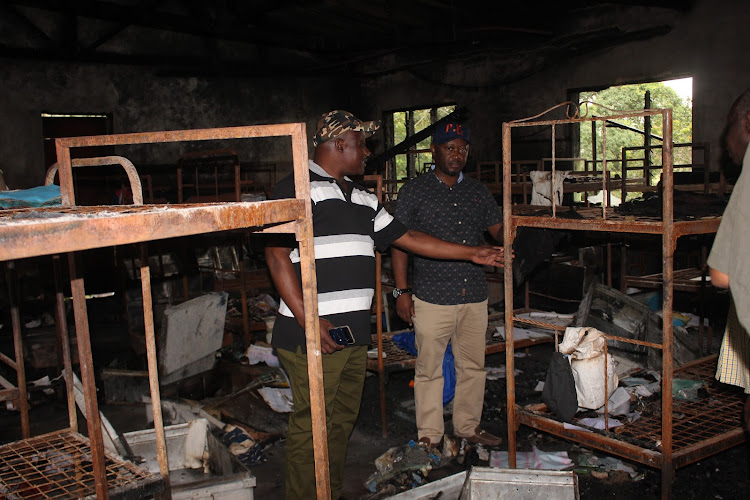 About 100 students at St George’s High School in Kaloleni, Giriama, are sleeping in a makeshift dorm after a fire gutted their Longonot dormitory.

Leaders led by Kaloleni MP Paul Katana on Wednesday toured the school to assess the damage. The fire is believed to have been caused by an electrical fault.

Katana said plans had been made to provide essential items for the students so they are not sent home.

“We have about three weeks to the end of this term and we do not want learning to be interrupted by the incident," he said.

"We will provide mattresses to the students and organise a classroom which we will turn into a dorm as we look for ways of repairing the burnt down dormitory.”

Kaloneni subcounty police commander Kennedy Osando said the fire started a few minutes to 8pm on Tuesday night while students were in class.

“The fire started at around 7:55pm, therefore, no causalities or loss of life was reported but they lost all their properties, including bedding and books and other personal items. It took about two hours for the fire to be contained,” he said.

The police boss said the school is yet to release a report to establish the extent of the damage. It is suspected that the fire started from the roof.

Police are also investigating a laboratory fire at Kizurini Mixed Secondary School three weeks ago. The day school is about a kilometre from St George's.

The laboratory caught fire at night. Katana urged the police to expedite investigations.

“We are calling upon the police to conduct thorough investigations to establish if it was an electrical fault or someone started the fire. We need to get to the bottom of this matter,” he said.

Katana dispatched a team of public works officers to assess the burnt dorm.

“Due to the 100 per cent transition, the dormitory is hosting a large number of students, meaning urgent measures should be taken to ensure it is either repaired or a new building is set up for the safety of the students,” he said.

"We cannot rule out arson in these two cases as school properties have been destroyed. We are waiting for the police to conclude their investigations to ascertain the cause of the fires."

Katana urged students to avoid peer pressure, which he said is the cause of many indiscipline cases in schools.

“Take your studies seriously. The outside world that you are crying for is not as easy as you think,” he said.

Parents Teachers Association chairman Mwamuye Bashir said the students will not go home, adding that they are safe.

“We cannot close the school because the dormitory was razed. We will inform parents of all the 100 students who were in the dormitory to tell them the measures we have taken" he said.

"We are preparing our Form 4s for the mock exams next week and sending them home will make them lose focus.”

Bashir said there was blackout for about half an hour and when the power was back on they saw the dorm in flames.

“We cannot rule out the cause of the fire to be an electrical fault since we have students who can do anything. We hope the investigations will reveal the cause,” he said.

A source said the students want their principal transferred, saying he has overstayed at the school.

“It is alleged that there is one student who asked others to leave the dormitory since he wanted it locked,” the source said.