• They have started receiving funds from national government and foreign donors to implement agenda. 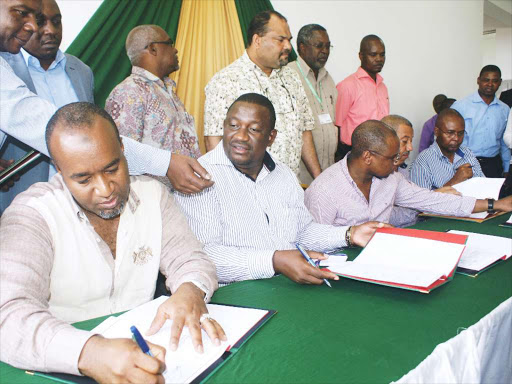 The Coast regional bloc Jumuiya ya Kaunti za Pwani wants to attain middle income status for the majority of residents by 2030.

JKP says it is banking on the vast opportunities in the blue economy to realise its vision for the more than four million residents.

In an exclusive interview with the Star, CEO Emmanuel Nzai said the secretariat is working quietly behind the scenes to advance its vision. The six Coast counties in the bloc are Mombasa, Kwale, Kilifi, Tana River, Lamu and Taita Taveta.

“The four components have a huge economic potential while the water bodies which include rivers, lakes and the ocean reflect the colour of the sky, hence the term blue economy,” Nzai said.

“The majority of residents of the Coast region eke their livelihood from fishing, tourism or the maritime subsectors which have not been developed fully to realize their full potential.”

Besides the blue economy, JKP is focusing on agriculture and livestock.

He said the main role of JKP is to make sure counties work together and prioritise their development to bring about shared prosperity.

The six Coast governors worked together with other elected leaders and technocrats to form the JKP and establish a functional secretariat based at the Technical University of Mombasa.

To create jobs for its huge unemployed population, JKP has trained 100 small businesses and 100 artisan miners to position them to reap from the upcoming revival of sectors associated with the blue economy and agriculture.

Although the six Coast counties are yet to adopt a unified blueprint to spur economic growth, JKP says it has already started attracting funding to drive its agenda.

“So far, we have secured a grant of Sh2.5 billion from the European Union and another grant of Sh5 billion from Kenya Ports Authority which will be staggered through the next five years to be channelled towards reviving the blue economy,” Nzai said.

JKP is working towards revival of strategic industries including partnering with the national government to save the collapsing Galana Kulalu food security project, revival of Kibarani slaughterhouse, Mariakani milk processing plant, revival of cashew nuts and coconut plants among other industries.