Jumwa accuses 'cowardly men' of ganging up against her

•Most Coast male politicians dismissed as cowards who do not defend the interest of the region.

•Jumwa's popularity has been growing since her expulsion from ODM. 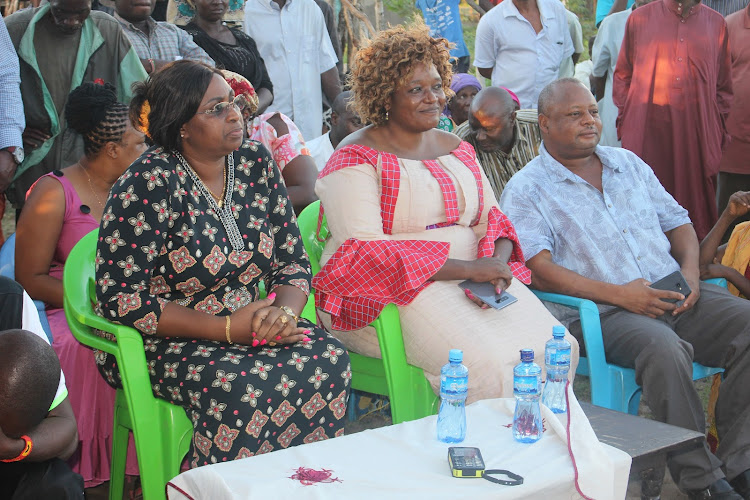 Malindi MP Aisha Jumwa has dismissed most Coast male politicians as cowards who do not defend the interest of the region.

“We have elected men in senior positions in this region but we are still languishing in poverty. The squatter problem is still with us. We need a fearless leader who will take the land problem head on and that leader is Aisha Jumwa,” the MP said on Sunday at Kiwapa in Kilifi.

She at the same time claimed that men eyeing the Kilifi gubernatorial seat have panicked and are ganging up against her after she declared interest in the seat.

The MP said she will not be cowed and will take them head-on. “I have what it takes to win this seat and I am fully going for it. The journey has started and there is no turning back.”

Jumwa said the region has had no kingpin for a long time and blamed this on cowardly male politicians.

She accused them of using the land problem as bait for vote hunting. “During the 2017 campaigns very senior leaders from this region came here and said they will help you get this land. They have now gone underground and will only resurface a few days to the general election with the same lies.”

But Baya brushed off Jumwa's "ganging up against her" claims. “That is empty talk. The number of potential candidates is growing and I doubt if there is anyone who can have such a plan unless one is not serious. Every leader knows his or her strengths,” Baya said.

Zawadi said, “It is absurd that men in their right senses can sit and plot how to win against a woman. These are the same people who plotted the ouster of Jumwa from ODM and they are now busy planning how to bring her down. We will stand by her and make sure she becomes the next governor.”

Kingi likened Jumwa to Mekatilili wa Menza and said her firmness is what is needed to turn around the county's fortunes.

“It is only Aisha Jumwa who can fit well into the shoes of Ronald Ngala and Karisa Maitha. The crop of leaders we have been electing in high posts has clearly demonstrated that it is not up to the task.”

Jumwa’s popularity has been growing since her expulsion from ODM. She has been traversing the county "preparing the ground" for her campaigns.

I'm ready to take the bullet for the Mijikenda, vows Jumwa

Jumwa might be the first female governor of the region.
Counties
2 years ago

Jumwa snatched a microphone as Sifuna addressed the mourners.
News
2 years ago
by ELIAS YAA Correspondent, Coast Region
Coast
28 May 2019 - 00:00