Governor says company must respect residents' decision; nobody should be forced to give up their land 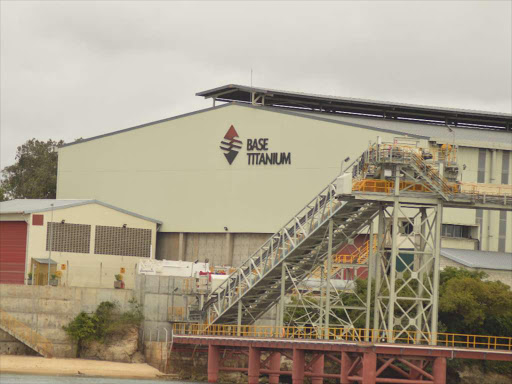 Base titanium company in Likoni,Mombasa. /FILE

Residents of Kwale have disagreed sharply over whether Base Titanium mining company should proceed with exploration in Ramisi, Msambweni subcounty.

Governor Salim Mvurya last week accompanied by his deputy Fatuma Achani held a meeting with residents at Mchinjirini and denied giving the company a prospecting license.

Mvurya told the residents the company must respect their decision and nobody should be forced to give up their land for mineral exploration.

But Eid Masemo from Kidzumbani who supports exploration said the county held meetings with Base Titanium and it was shocking they now oppose the matter.

He said their ancestors sold land carelessly because they did not know its value but mineral exploration is the only way the present generation can benefit.

He said those who oppose mineral exploration fear because they don't have title deeds.

“Our colleagues who oppose this exercise have a right to do so but do not try to force those who want to cooperate. It is their decision to make,” he said.

Some residents fear the Australian mining company will breach the contract once minerals are found because they think that the government has not been fully involved, Tawfiq Hamadi said.

Support of the exploration say they want to see youths get jobs and their land should be returned once mining is over in case minerals are found.

But opponents say ever since mining started in Kwale nothing good has come to them but unfairness, displacement and pain.

Asha Mwakombora said she has seen her colleagues pay for the consequences of allowing mineral exploration on their farms.

“This is not the first time. We know individuals who were lured into such tricks but they now deeply pay for their actions,” she said.

Mwakombora said she would want to raise her grandchildren and leave them the land.

“At this age, I am not willing to relocate anywhere. Our ancestors' graves are here and so the children will inherit everything once the time comes. What will I offer them if I give up the land for mining?”

Residents say they have received threats and intimidation from Kidimu residents.
Counties
3 years ago
by CHARI SUCHE Correspondent, Coast Region
Coast
25 May 2019 - 05:00